Well, this is certainly different [BMW]

...BMW is reportedly planning for a model run of between 5,000 and 10,000 units in 2013... [and] ...BMW has no plans to ditch the radical plug-in hybrid powertrain, which put out 356 horsepower and a stonkin' 590 pound-feet of torque in the concept. That means we'll get something similar to the turbocharged three-cylinder diesel range extender and twin electric motors powered by a lithium polymer battery pack that was featured in Frankfurt. Sounds great so far, and BMW claims the performance will be even better than the 4.8-second 0 to 60 run quoted for the concept. 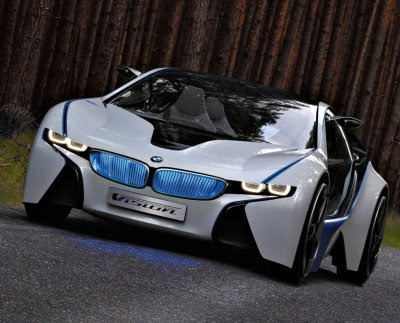 Naturally, some of the Vision's more outlandish exterior bits will go the way of the Dodo, but IL reports BMW's target of weight is still under 3,000 pounds, meaning that high-tech composites and construction techniques are a veritable lock. Price for this next-gen eco-friendly supercar? Nothing announced – but if you have to ask... well, you know the rest.

Another hybrid supercar: this is getting almost passe.

at 8:13 PM
Email ThisBlogThis!Share to TwitterShare to FacebookShare to Pinterest
Labels: Autos