The headline at Clusterstock says it all:

The Obama administration is changing the way it counts jobs created or saved by stimulus spending in a way that will make the programs look far more successful. 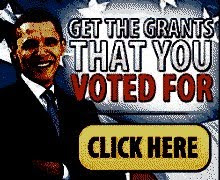 Under the old rules, only jobs that were actually newly created or not lost because of stimulus money were counted. Now the administration plans to count all jobs for projects funded by stimulus money—even if that job already existed and the person was never in danger of losing the job.

The changes were made in a little noticed memo sent to federal agencies by OMB director Peter Orszag, according to a new report from ProPublica...

...California, for instance, claimed that stimulus spending had saved 18,000 corrections department jobs—when only 5,000 were scheduled to be cut. Under the new system, all of those jobs could be counted as products of the stimulus.

That can' be right. My neighbor had a big yard sign that said "Hope" on one side. And "Change" on the other. My dogs peed all over it, but still.


Headline style ripped off from Ace. Linked by: Michelle Malkin. Thanks!

When the Administration comes up with a count of saved jobs that is greater than the population of the U.S. perhaps the media will take notice?