Obama Deputy Propagandist David Plouffe (pronounced Fluff) can't be too pleased with the timing of his latest fabrications:

“You’ve got a few very wealthy people lining up trying to purchase the White House for Mr. Romney,” said Plouffe on ABC’s “Good Morning America.” “We’re going to have to have everybody out there who wants the president to continue to a second term to step up and help the campaign.”

The timing was especially poor because within a few hours of Fluff's statement, The Wall Street Journal published a shocking report on the true state of campaign contributions.

The executive summary: political spending by labor unions blows away private contributions by the rich, the poor, and everyone in between: 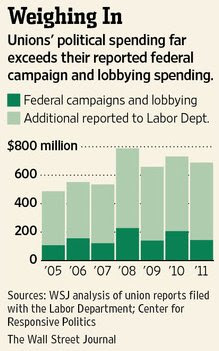 Organized labor spends about four times as much on politics and lobbying as generally thought...

...The new figures come from a little-known set of annual reports to the Labor Department in which local unions, their national parents and labor federations have been required to detail their spending on politics and lobbying since 2005...

...The result is that labor could be a stronger counterweight than commonly realized to "super PACs" that today raise millions from wealthy donors...

...The hours spent by union employees working on political matters were equivalent in 2010 to a shadow army much larger than President Barack Obama's current re-election staff, data analyzed by the Journal show...

In short, Fluff was once against exposed as the disgraceful propagandist he truly is. He'd be at home in the old Soviet Union, working for Tass.

Considering how effortlessly he lies for the O, I think that Fluffer would be a better name.

The web of lies surrounding Obama is so thick it's impossible to comprehend.
Fluffer is only showing how little Obama cares for America and her people. He doesn't care enough to even do the slightest bit of research before allowing his minions out into the wild.

I'm starting to think of BHO as Kim Jung Il's lost brother. He is certainly trying to pass off a completely staged life and presidency.
Time for Obama to exit stage don't-care-as-long-as-he's-gone. But it will take a shepherd's hook to get him out of 1600 PA Ave.

Plouffe forgot about the wealthy people who are supporting his boss: Harvey Weinstein, George Soros and wealthy actors like Clooney, Pitt and so on. And lets not forget about Taco Bell heir Rob McKay. Plouffe reminds me of the pot calling the kettle black phrase. Face it Davey, your boss is going to lose!! You can always get a job with MSNBC and join the other leftwing hacks who are employed there.