Just when you thought Operation Fast and Furious -- and its cover-up -- couldn't get any worse, another layer of the onion gets unpeeled.

US Border Agent Brian Terry was shooting beanbags at cartel members before they shot him dead with assault rifles. (Truth about Guns) 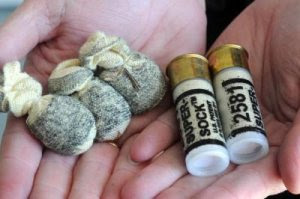 For the first time the Obama Administration today admitted that Brian Terry and fellow border agents were firing beanbags and not bullets during their shootout with armed cartel members... FOX News reported, via Free Republic:

For the first time, federal officials revealed Monday that murdered Border Patrol agent Brian Terry and an elite squad of federal agents first fired bean bags — not bullets — at a heavily armed drug cartel crew in the mountains south of Tucson in December 2011.

The announcement came as the Department of Justice unsealed an indictment charging five individuals allegedly involved in Terry’s death. A sixth suspect has also been charged in a related incident.

The U.S. is also offering a reward of up to $1 million for information leading to the arrest of four outstanding suspects believed to hiding out in Mexico. The names of the four suspects were revealed, and their pictures released, to the public. Police in the US and in Mexico are cooperating and under intense pressure to find them.

[Commenter] Roark added: "Disarmed by the very bureaucrats that armed their killers."

This is the biggest political scandal in the last century. And vintage media, for the most part, refuses to report on it.

The mass murders facilitated by Eric Holder -- and the subsequent cover-up by the Obama administration and Holder -- make Watergate look like a parking violation.

Every Republican in Congress needs to demand Eric Holder's immediate resignation. Contact your Representative now and ask them whether they have done so. If not, why the hell not?

And it reflects poorly on Obama not only that he appointed this incompetent, but has stood behind him in the face of overwhelming deceit and incompetence.

SO OBAMA WAS DISARMING OUR UYS AS HE WAS ARMING THEM???!

Bean bags and riot control go together, just like Holder and Supermax will go together... that is, after he gets out of the Mexican prison system.
Terminate his employment.
Disbar him.
Strip him of benefits.
Send him to Mexico.

And do the same to every Federal Employee or Contractor who tried to cover this up.

Even worse: the GOP enablers, who belong on the wall of shame:

Resignation!?
How about Impeaching the racist, lying, murdering son of a bitch for starters.
Remember, this hairball was involved in Waco.
There is evidence he was involved as far back as Oklahoma City bombing.

Everywhere this treasonous bastard shows up there is a trail of dead bodies in his wake.

I say impeach Holder. It is a great place to start.

The worst of it Holder is low hanging fruit. It is those who ordered Fast and Furious who need to be held accountable with their very souls for these wicked crimes of treason and murder. For the unmitigated breach of the rule of law, violation of Liberty, and most egregious of all, lying through their teeth when they took the oath of office.