DiGENOVA: An "Impeachment" Constructed of Lies

House Intelligence Committee Chairman Adam Schiff (D-Calif.) has been trying to overturn the 2016 election from day one, and he isn’t about to let something as trivial as the truth get in his way.

Schiff has pursued that aim relentlessly for the past three years, jumping from one conspiracy theory to another—from Russia to Ukraine, from tax returns to absurd “dossiers,” from Robert Mueller to Michael Avenatti, and back again. All the while, he has revealed his naked partisan motivations and portrayed himself as some kind of defender of truth.

In reality, everything about Schiff’s still-fruitless crusade against our duly-elected president is built on lies. The dishonesty runs back to the very beginning of the Trump presidency. Just one month after Inauguration Day, for instance, Schiff was gleefully reading juicy tidbits from the blatantly fraudulent Steele dossier into the Congressional Record.

Of course, we learned that Hillary Clinton had paid a thoroughly discredited British ex-spy to invent those salacious claims about Donald Trump being a Russian asset, but Schiff quickly distanced himself from it once that became public. Schiff later made the very questionable claim that the dossier actually had nothing to do with kicking off the Russiagate witch hunt. Every so often, he would go on TV to claim that there was “damning,” “significant” evidence “in plain sight” that President Trump colluded with Russia. He never showed that evidence because, as we all now know, the collusion claim was a lie. 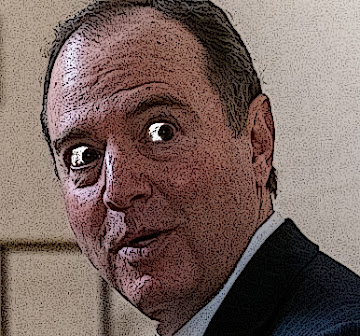 But it’s a lie for which Schiff never apologized. Neither did he bother to explain it. In fact, just three weeks after the Russian collusion conspiracy theory let out its dying last gasps during Special Counsel Robert Mueller’s testimony before the House Intelligence Committee, Schiff was talking to the CIA “whistleblower” about his hearsay account of a whole new conspiracy theory involving President Trump’s call with Ukrainian President Volodymyr Zelensky.

How did Schiff handle those interactions? Once again, he lied, telling the public that his office had never been in direct contact with the leaker. In reality, they were in contact from the very beginning, and Schiff’s staff even knew the “whistleblower” had links to a Democratic presidential campaign.

After exploiting the “whistleblower’s” account to revive his frustrated dreams of impeachment, Schiff still couldn’t play it straight. President Trump had already released the record of the call in question, but Schiff took it upon himself to keep lying about what was in it. In his opening remarks, he recited a fake version of the call, one that explicitly had President Trump strong-arming his Ukrainian counterpart to make up dirt on Joe Biden. He called that particular lie a “parody.”

Those falsehoods are just window dressing, though. The central lie of the entire push for impeachment is that Schiff and his fellow Democrats actually believe the president has done something so awful he needs to be removed from office—they just haven’t discovered it yet.

The fake narrative they’re pushing—that the president was trying to get the Ukrainian government to “dig up dirt” on Hunter and Joe Biden—is in fact the thing they themselves have been trying to get the Ukrainians to do to Donald Trump for more than three years. Three Democrat senators even sent a letter to Ukraine in 2018 expressing outrage over rumors that the country might not cooperate fully with Mueller’s investigation. Now these same Democrats are, in effect, ignoring the president’s legitimate interest in investigating possible corruption in a country that receives massive amounts of aid from American taxpayers.

I wouldn’t expect Schiff to stop lying any time soon. He’s already promising new “bombshells” and evidence of guilt at his hearings, but if history is any guide, they will turn out to be big fat lies just like the last ones he told.

THE DEMOCRATS LUST FOR POWER & CONTROL

"It's about Absolute Power, Slavery..& DEPOPULATION
of all who dare to oppose there Lawless totalitarian ideology..!
By Any & All Means Necessary..!

He must have something REALLY REALLY big that he is afraid Trump is going to expose. What a stinking sewer the Democrats are along with more than a few Republicans. May they all have the pleasure of standing before GOD very soon to give account of themselves.

The RATS have quite the body count, probably 60 from the Clintons alone, not to mention the politics of personal destruction as with Tom Delay, Alberto Gonzales, and so forth. Even Obama said he "was pretty good at killing people".
Republicans? Meh, Trump hasn't killed one Democrat yet, he just tells the truth and they start screaming that they are living in hell.