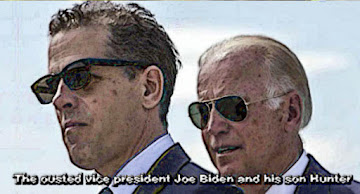 If your mailbox is getting filled with emails promising lucrative money transfers from Eastern Europe to your personal checking account coming from "Hunter Biden, son of the ousted Vice President Joe Biden," (rock.candy@burisma-group.com), do not respond.

Thousands of people in Eastern Europe and around the world have reportedly been scammed by such proposals in recent years. The emails usually contain urgent business proposals, from shipments of thermal blankets for the military to wiring millions of dollars to your savings account for a 30% portion of the amount. In addition to losing money, victims of these scams, such as, the previous government of Ukraine and some of its businesses must now answer very uncomfortable questions.

As of late, the mailings also contain an added request from the son of the ousted vice president to help him to relocate to the recipients' countries due to a worsening criminal climate in the homeland.

See the example below.

Greetings, my prospective rich and powerful friend in a foreign government,

This message may come to you as a surprise because you do not know me. I am Hunter Biden, son of the deposed vice president Joe Biden, seeking for an avenue to enter into an urgent but lucrative business transaction without delay. My poor father was a strong supporter of the ousted president Barack Obama, for which he had received control over one billion US dollars to be distributed among trusted friends and associates with reputable credit history, like yourself.

Right now my father is suffering from dementia and doesn't remember where he put that one billion dollars. That leaves me as the only heir with access to my father's fortune in the banks of Lagos, Tripoli, and Benin. Please be aware that the unlawful regime of Donald Trump wants this money back, so we better act fast. Additionally, I have keys to the crates with unmarked bills in the amount of 50 million dollars, Euros, and dinars, kept in a safe cargo area in a friendly Middle Eastern country. Half of this money can be yours if you allow me to become your business partner and if you follow my detailed instructions.

After Trump overthrew my father's democratic regime, I have lost my sustenance as a military officer and my family has been harassed and threatened with dirty investigations. I cannot disclose any sources, but I'm in possession of sensitive inside information which I'm willing to share with you because I trust you to keep this confidential. Believe me when I say that very soon, with the help of faithful friends like yourself and others who have previously become my trusted business partners, Trump will be toppled and my poor father will regain his rightful seat in the White House. Our family will generously reward those instrumental in our comeback. This could also be you if you respond to this letter within the next 15 minutes.

Trump's criminal tentacles have now reached the State Department and the Department of Justice, which makes it unsafe for us to conduct international transactions as usual. That is why I am offering to receive your contribution in the form of placing me on the Board of Directors of one of your national corporations with a salary equal or exceeding $83,000 a month.

These low monthly payments will guarantee that your government receives all the needed international aid, preferential trade agreements, IMF loans, modern weaponry, plus a positive media image to help perpetuate your power regardless of your political ideology. And if you also hire my uncle James, I can promise you highly classified intelligence sharing. All this will be yours as soon as my father becomes President and I take control of his executive office. My father has never denied me anything, and given his declining state of mind he is not going to start now.

I'm also asking you for a small personal favor. I wish to temporarily relocate to your country due to the poor conditions in the US, where I am fully exposed to prosecution, media inquiries, and congressional subpoenas. Your immediate response will guarantee you a better outcome.