DEAR DEMOCRATS: An Open Letter About Chinese Influence Operations in the U.S. 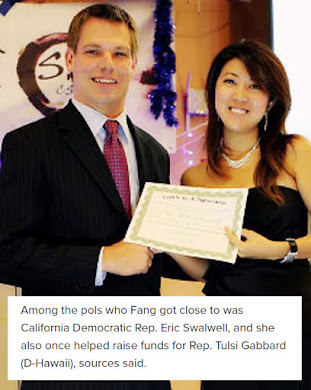 Hope you are doing well during this holiday season. I would just like to ask a question or two about some items that crossed my desk recently:

1. Eric Shartwell (D-CA) seems to have been cavorting and/or sleeping with a Chinese spy until alerted by the FBI that he had been compromised;

2. Dianne Feinstein (D-CA) had a Chinese spy as driver and chief adjutant for 20 years, while her husband cleared $100+ million from Chinese business relationships; she, too, was alerted by the FBI that her office was compromised;

3. Hunter Biden, the spectacularly unqualified son of Joe, magically pulled $1.5 billion in private equity funds from China while his Dad was VP;

4. AXIOS just reported that China has completely infiltrated California's Democrat Party with the ultimate goal of destroying the United States;

After four years of screeching about "Russia collusion", why aren't you hysterically ranting about Chinese bots and Chinese influence operations and Chinese election interference as you did in 2016, 2017, 2018 and 2019?

Could it be you're in bed with the Communist Chinese Party? Was "Russia Collusion" intended to deflect attention from the Democrats' real, and very treasonous, activities? And how do you think "Honest Adam Schiff" might relate to all of this?

That is what is so creepy about their derangement. Lack of compunction. No regret. A cold indifference to the evil that they have wrought.

But on the outside, they are rather quite normal in appearance. Belying the Marianas depth of their madness.

Swalwell needs to be sent packing. Fang needs to make an adult film, in order to make a full evaluation of her merits.

We really do not need enemies when we have "friends" like Democrats.