In short, if you trust "Politifact" or "FactCheck.org" to adjudicate questionable claims, you better start looking for other sources.

Exhibit 5,003,406: The "Factcheck" article -- which attempted to debunk overwhelming evidence of Georgia election fraud -- asserted that there was never any water main break in State Farm Arena, where absentee ballots were tallied, and that counting never stopped.

Too bad the Internet always leaves evidence, this time in very plain sight. Here are the right-wing, pro-Trump alt-right kooks at CBS reporting very late on Election Day (not at 6:07am):

CBS reported "A water pipe has broken in State Farm Arena… this is Georgia’s most populous county and now counting [of absentee ballots] has stopped.”
Chyrons scrolled merrily along during the report that confirmed the news. 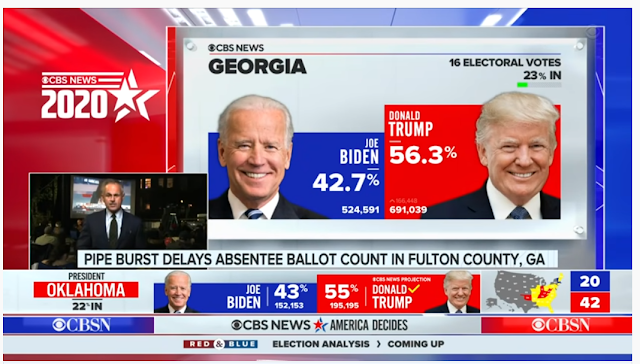 In short, Factcheck ignored on-the-scene, live reports to push their Marxist ideology. They investigated nothing and simply regurgitated comments from other Marxists.
I can only conclude, with all due respect of course, that Factcheck.org is a steaming pile of hot garbage laced with animal feces.
Hat tip: BadBlue News, Uncensored and Unfiltered.
at 5:43 PM
Email ThisBlogThis!Share to TwitterShare to FacebookShare to Pinterest
Labels: Biden, Crime, MSM, Trump, Vote Fraud

"I can only conclude, with all due respect of course, that Factcheck.org is a steaming pile of hot garbage laced with animal feces."

You're giving animal feces a bad name by comparing them to factcheck.org.