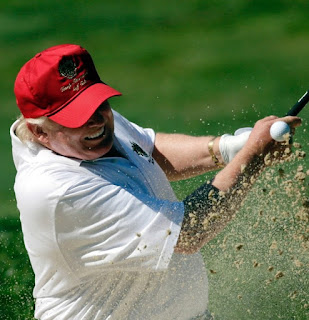 On the one hand, he insists, voters are being disenfranchised.

On the other, if delegates were proportionally awarded based upon the popular vote, Mr. Trump's come out a couple dozen delegates ahead.

After an unbelievable and unprecedented run of free media coverage -- as well as a few early victories -- Trump appears to have grown lazy and overconfident. He didn't bother to build a ground operation, the heart of a grassroots campaign.

Even though California's primary is in a few weeks, he just hired a political director for that state a couple of days ago.

Further, everyone has known about the delegate rules for months, if not years.

Trump is a decent entertainer. A masterful politician, not so much.

Trump needs to stop belly-aching. He's of course right from any fair or moral standpoint, but this is politics. There is nothing fair or moral about GOPe politics. Any damn fool knows that. Trump knew that before he began. Besides, you play the game with the rules you start with. If you don't like the rules, change them before or after the contest.

Even bearing in mind he has admitted even before he announced that his campaign strategy was to sucker the media into giving him overwhelming coverage, he does comes off as amateurish and buffoonish pretty often.

Any half-assed decent candidate would have EASILY clobbered Trump within a couple of months, if not weeks.

I'd say that just confirms that this election's crop of other-rans are the worst in GOPe history.

Now THAT'S really saying something when you consider that within living memory the GOPe nomination has won by such unlikable and mediocre politicians as Ford, Dole, McCain, and Romney.

Yep. I'd have to say we're agreed. If at this point you are so unlikeable, stupid, and incompetent to be losing to the campaign that Trump has run, there is NO WAY you're competent or intelligent enough to be president. I'll sure never vote for one of them.

Glad to see we're back on the same page. I was starting to get worried about you!

(PS-Doesn't in anyway mean I want the GOPe to CHEAT Trump outta the race to attempt to correct their years of bad management. The AMERICAN WAY is still a fair competition, you have to actually play during the game to win it, and you finish with the rules you started with. You can change them before the next contest if don't like how the last game came out. Anything else is un-American cheating and would dis-qualify the GOPe from any legitimate claim of being an American institution.)

I'm so far outta the Late Nite Loop (early mornings and long work days!) that I had no idea Jimmy Fallon was openly and proudly gay!(Already knew he was a bad actor,LoL) I gotta start keeping up, LoL!

Thx for the enlightenment link!

(PS- I thought Cruz was part of that beyond-Pentecostal off-shoot cult, a preacher of it possibly even, that was ultra conservative and 100 percent against drinking. If so, it seems kinda odd to see him promoting drinking as an answer to minor annoyances just for the sake of a very secular comedy show probably not even worth a handful of votes to him... Isn't he supposed to be the values guy? Is just confusing to a poor dumb redneck guy like me...)

Despite the words, you might be exactly as you describe yourself. You have a very sly writing style. Funny, I never knew Cruz to be part of the GOPe with as much animus as actual GOPe show him. Trump isn't GOPe or even GOP or whatever else you may use to define someone who is not a Dem. I'm truly surprised the lazy demagogue was allowed to run as an R - because he isn't one. That has never been a Road to Damascus moment, ala Reagan (mixing metaphors) for one Donald Trump. A man who remarkably has no core, no principles. But your sleight of hand on Cruz being a preacher..... Artful. He's a Southern Baptist, as am I. Plenty of Baptists, myself included, have no issue with good humor. And the video clip was good humor. So, while you may write smoothly and slyly, you spread ignorance with your closing comments with perhaps a single purpose? Trump is written all over you.

Trump DESERVES the nomination! He has 37% of the vote! Why, that means that 18% of the electorate wants him!

Seriously, his incompetence won't allow him to even prepare for the November elections. If he can't set up the organizations he will need to win these states, he doesn't deserve it.

I told my wife that I was even thinking I might even want Kasich over Trump this morning, but then coincidently heard him saying stupid liberal things on the Larry Kudlow show and quickly changed my mind. So if Trump gets the nomination, I will spend all day drinking, and then go vote for him. But if I'm lucky, I'll pass out first.


Really? I thought Cruz was into some of that Pentecostal, Charismatic, Third Way, Dominionist, Restoration stuff. Some (not all) of those people hold that it's all permissible, any sin to advance the cause of God retaking the Earth-Kingdom. I've had some less radical than that bunch (just the plain and simple Charismatic variety) tell me straight to my face that there was nothing wrong with "lying for God", and thats right outta their mouths. I call that fringe enough to get the "cult" label.

I'm awfully glad to hear Ted's not part of that. Hard to trust anybody that thinks that God WANTS them to lie. If Ted's straight up Southern Baptist, I'll have to say I'm truly sorry for tarring him with that brush cause thats a terribly tarred brush!

And for better or worse, I'm sure most people out here in webs would label me exactly as I'm presenting myself. Heck, I label myself that way! Except for the part about having stuff written all over me. Been a good Southern Baptist most of my life and I don't believe in tattoos or marks on my body, but I surely do believe in a good sense of humor!

Thank you for correcting me on Ted's affiliation. I'll go research it it a bit so I don't make that mistake twice!


Oops, stupid me! Forgot to sign that last one. That next one up is me!

Until or unless we catch Ted habitually lying, we are duty bound to take him at his word that he is a Southern Baptist in good standing and not a Pentecostal-Dominionist cultist. You know most people would probably put their soul at risk before they would refuse an anointment from their earthly father, even if they believed that he was preaching heresy. And folks are more than their raising. No matter what he and Hedi were taught, if they have strength of character and God's help, they could definitely overcome that.

So Mr Cruz, if you're reading this, please accept my apologies for thinking that you were probably a Pentecostal-Dominionist without any real evidence of it.