MADISON, Wis. – U.S. Sen. Tammy Baldwin this week may have crystallized for conservatives why Senate Republicans are digging in their heels on President Barack Obama’s Supreme Court nomination.

“One only has to look at the Court’s docket this year in particular to see the gravity of the issues that they are grappling with. We know that a Supreme Court justice who’s able to serve 10, 20, 30, 40 years is someone who’ll shape the interpretation of policy for a generation or more,” the Madison Democrat told Politico after leaving a protest on the steps of the Supreme Court on Tuesday morning.

No wonder conservatives want nothing to do with an Obama nominee, even a so-called “consensus candidate” in appeals court Judge Merrick B. Garland.

Twenty years of another liberal like Justice Ruth Bader Ginsburg on a left-led court would be disastrous for core conservative and constitutional principles, conservatives assert.

Baldwin, an openly gay senator from one of the most liberal cities in the nation, was part of the Obama Supreme Court dog and pony show Thursday. It’s the highly politicized shame game to make intransigent GOP senators change their minds on a hearing for Garland. Republicans remain mostly united in their stance that the next president – be that chief executive a Republican or Democrat – nominate a replacement for conservative Justice Antonin Scalia, who died in February.

In short, no Obama nominees in this election year.

“We absolutely will not allow the Supreme Court to flip,” U.S. Sen. Ron Johnson, Wisconsin’s senior senator, said last month at a political forum hosted by Milwaukee conservative talk-radio host Charlie Sykes. Johnson made his comments to thunderous applause, according to the New York Times.

That enthusiasm from the base shows why Obama and his left-wing, politically driven shame game may fail to move the Republican position.

While a CNN/ORC poll late last month showed a slight majority of respondents, 52 percent, said Garland should be confirmed, the conservative base has a profound distrust of this president and his ultra-liberal leanings.

“Yeah, I am hearing the drumbeat, ‘Do your job! Do your job!’ ” Johnson said, playing off the Dems’ meme in their pressure campaign to get Garland a hearing. “We’re doing our job,” Johnson declared, to shouts of “yes,” according to the Times.

“President Obama job is to nominate and he chose to do that,” the Oshkosh Republican told Wisconsin Watchdog last month. “Our job is to advise and consent.”

The Senate’s advice, Johnson said, was the same as Vice President Joe Biden‘s, who in 1992 as Senate Judiciary Committee chairman urged President George H.W. Bush not to send a Supreme Court nominee to the Senate during that election year. 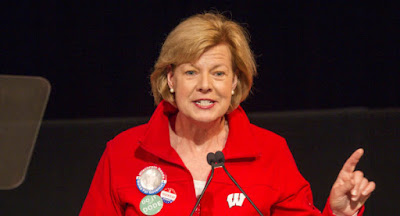 Should there be a vacancy on the court, Biden said, Bush should “not name a nominee until after the general election is completed,” and if he did, the “Senate Judiciary Committee should seriously consider not scheduling confirmation hearings on the nomination until after the political campaign season is over.”

“Senate consideration of a nominee under these circumstances is not fair to the president, to the nominee, or to the Senate itself,” Biden said. “Where the nation should be treated to a consideration of constitutional philosophy, all it will get in such circumstances is partisan bickering and political posturing from both parties and from both ends of Pennsylvania Avenue.”

Funny how the times change. Biden was on the political PR trail this week explaining why the “full Supreme Court Matters to You.”

On Thursday, Johnson said he was open to meeting with anyone, including Garland. But his view has not changed.

“Wisconsinites’ Second Amendment right to bear arms and other fundamental liberties are at stake, so I will continue doing my job as a constitutional check on the president’s power, and we will continue to withhold our consent until the American people have a voice through their votes this fall,” the senator said.

Johnson’s Democrat opponent, former Sen. Russ Feingold, whom Johnson beat in 2010, has tried to fire up his troops with the Supreme Court issue. He says the incumbent and his Republican colleagues are “playing” to their base, failing to note the partisan impact from the left.

“They protect those at the very top, and they are not even willing to do their job when it comes to a clear issue on the Supreme Court because everything is about being partisan and keeping control on the Supreme Court,” Feingold told the New York Times. “So people smell a rat. They smell that something is not honest about this.”

Liberals see the issue as a big winner come November, with voters taking out their frustrations over the Supreme Court battle on Republicans at the polls – delivering the Senate back to Democrats and retaining control of the White House. Ultimately, the nominee will be the left’s anyway, and his confirmation will follow, or so the left-wing vision goes.

Feingold and his friends, however, fail to see that Johnson, his fellow Republican senators, and many millions of Americans see the fight on constitutional principles.

“The left wants the Supreme Court flipped. They want an activist court,” Johnson told Wisconsin Watchdog. “They want to have President Obama appoint another super legislator to join the liberal block and what would be put at risk are your Second Amendment rights to bear arms, your First Amendment rights to free speech and religious liberty. That’s what is at stake here.”