With Islamic terrorism on the rise in the United States and Western Europe, it’s worth mentioning that the Obama administration issued around 680,000 green cards to foreigners from Muslim countries during a five-year period, according to data published by the Department of Homeland Security (DHS). The stats, the latest made available by DHS, also show that the U.S. government admits more than double the number of immigrants from Muslim nations than from the European Union.

This disturbing information was circulated by the Senate Judiciary Committee’s subcommittee on Immigration, which assesses that if there’s no change in the current policy, the U.S. will likely grant another 680,000 migrants—possibly more—from Muslim-majority countries green cards in the next five years. According to the DHS figures cited by the panel, Uncle Sam issued approximately 680,000 green cards to immigrants from 49 Muslim nations from fiscal year 2009 through fiscal year 2013. Over the same period, the U.S. issued only 270,000 green cards to migrants from the European Union, according to a committee announcement that reminds us “a green card entitles recipients to access federal benefits, lifetime residency, work authorization, and a direct route to becoming a U.S. citizen.” Some of the recipients are admitted to the U.S. as refugees so they immediately qualify for federal welfare benefits like food stamps and Medicaid. 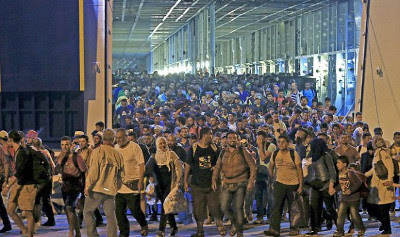 The DHS stats include a breakdown of the countries where the migrants came from. Pakistan and Iraq sent over the most with 83,000 apiece and Bangladesh had 75,000. Seventy-three thousand came from Iran, 45,000 from Egypt, 31,000 from Somalia, 24,000 from Uzbekistan, Turkey and Morocco had 22,000 each, Jordan and Albania 20,000 each and Lebanon and Yemen each had 16,000. Rounding out the five-digit club is Indonesia (15,000), Syria (14,000), Sudan (13,000), Afghanistan (11,000) and Sierra Leone (10,000). The rest, including Saudi Arabia, Algeria, Kosovo and Libya, only sent over a few thousand during the five-year period covered by the DHS data. By contrast, only 65,000 green cards were granted to migrants from the European Union country (United Kingdom) with the highest number during this period. The Senate committee reveals that DHS has not yet published statistics covering fiscal year 2014 and fiscal year 2015 so we’ll be on the lookout for that.

National security has never appeared to be a priority for the Obama administration, but this is downright alarming as the U.S. encounters burgeoning threats from radical Islamists. The president’s ongoing effort to befriend and protect Muslims in the U.S. hasn’t put a dent in these eminent threats. Over the years Judicial Watch has reported on a number of initiatives, including programs at key federal agencies, launched by the administration to reach out to or protect Muslims. DHS even met covertly with a group of extremist Arab, Muslim and Sikh organizations to discuss national security matters and the State Department sent a controversial, anti-America Imam (Feisal Abdul Rauf) to the Middle East to foster greater understanding and outreach among Muslim majority communities. The president also hired a special Homeland Security advisor (Mohamed Elibiary) who openly supports a radical Islamist theologian and renowned jihadist ideologue and a special Islam envoy that condemns U.S. prosecutions of terrorists as “politically motivated persecutions” and has close ties to radical extremist groups.

As if this weren’t bad enough, the administration caved into a terrorist front organization’s demands to purge FBI anti-terrorism material determined to be offensive to Muslims. The group, Council on American-Islamic Relations (CAIR), was founded in 1994 by three Middle Eastern extremists and JW obtained hundreds of pages of FBI documents with details of the outrageous deal. Read all about it in this special report. More recently, the administration followed the orders of Islamic activists in suspending an FBI internet program aimed at preventing the radicalization of youth because Muslim and Arab rights groups determined that it discriminates against Muslims and will lead to bullying. After the San Bernardino terrorist attacks the administration issued a warning regarding workplace discrimination “against individuals who are, or perceived to be, Muslim or Middle Eastern.” The directive orders American businesses to accommodate the religious needs of Muslims and assure they aren’t being harassed or intimidated.

How much more proof do American need to finally acknowledge that America's #1 enemy sits in the Oval Office? So self-assured is he of NOT being prosecuted he operates against this country by the light of day.