In the aftermath of the Paris and Brussels terrorist attacks the European Union’s own border agency, Frontex, has admitted that there is no way to effectively screen or track refugees coming across the border. The report also admitted that the large number of refugees pose a security threat for the EU countries.

“There is no EU system capable of tracing people’s movements following an illegal border-crossing. Therefore, it is not possible to establish the precise number of persons who have illegally crossed two sections of the external borders of the EU,” the report said.

The reported number of illegal crossing hit a new record of 1.82 million last year, six times higher than what was recorded in 2014. 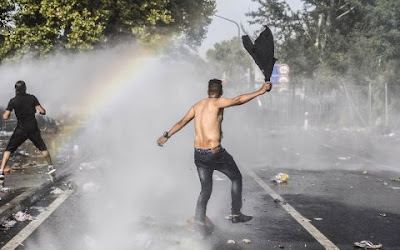 The Frontex report also warned that a high number of EU citizens who left to join ISIS are now posing as refugees to gain entry back into Europe. The report acknowledged that, "With no thorough check or penalties in place for those making such false declarations, there is a risk that some persons representing a security threat to the EU may be taking advantage of this situation.”

It has been confirmed that two of the terrorists in the Paris attack entered as refugees through Greece.

FBI Director, James Comey, made similar security claims about refugees during a Senate hearing last year. After the Paris attack a majority of governors called for a halt in bringing Syrian refugees to the U.S. due to national security concerns. Last year the Obama administration said it would increase the current level of refugees from 70,000 to 85,000 this year with at least 10,000 coming from Syria.

Read more on this story at The Telegraph.