The Sunday New York Times continued its drip marketing campaign to position Hillary as trustworthy, this time utilizing another of its Leni Riefenstahl clones.

In this case, someone named "Little Nicky Kristof", if that is his real name, took a crack at resurrecting Hillary's horrid reputation.

Kristof's unintentionally comedic offal was entitled "Debunking the ‘Crooked Hillary’ Myth", which is somewhat akin to "Debunking the 'Sun is Hot' Myth".

Clinton defenders like to grade on a curve, and suggest all pragmatic politicians blur the truth a little, even suggesting voters should want someone who blurs the truth like this. On issues, Kristof writes, “she can be infuriatingly evasive,” but “Does that make her scheming and unprincipled? Perhaps, but synonyms might be 'pragmatic' and ‘electable.’ That's what presidential candidates do.”

Kristof is basically Xeroxing a recent column by his former Times colleague, Jill Abramson, whose recent Guardian column claimed “Hillary Clinton Is Fundamentally Honest.” He joins her in dragging out PolitiFact as a defense of her honesty...

...Kristof needed a fact-check on the fact-checking citation. This correction was appended: "An earlier version of this column misstated some of the percentages of true statements as judged by PolitiFact."

Wait: make sure you're sitting down!

What Kristof doesn’t do is disclose he’s spoken at many gatherings of the Clinton Global Initiative.

Sorry, Nicky. Hillary's "trustworthiness" poll numbers demonstrate that roughly 99.7 percent of the public believe that she is a malevolent, disgusting, cold-blooded, and entirely crooked liar.

Furthermore, each and every email that is recovered from her illegal bathroom server paints in more of the picture, most recently this revelation:

...[A newly discovered] record of a phone call by Clinton the day after the attack. “S” is Secretary Clinton. In a call to then-Egyptian Prime Minister Hisham Kandil she said that the deadly terrorist attack on the US compound the day before “had nothing to do with the film.” 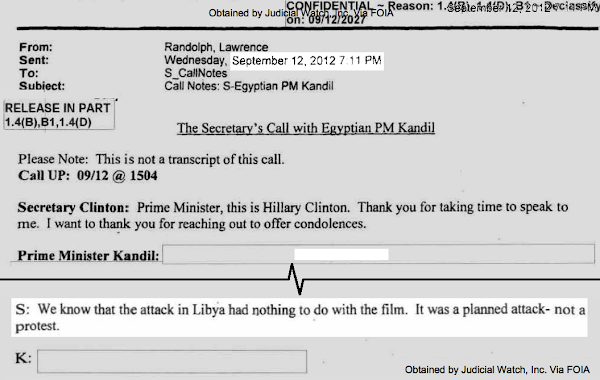 On the prior evening (September 11) Mrs. Clinton issued an official State Department press statement, approved by the White House, placing the blame for the attack on an Internet video:

As New York's sole honest newspaper observed last December, the video fable was Hillary's most repugnant lie, as she told the family members of heroes Glen Doherty, Sean Smith, and Tyrone Woods after the Benghazi attack that she was going to "have the filmmaker arrested who was responsible" for the attacks.

Kristof is a disgusting hack, but the device has yet to be invented that can measure how utterly abhorrent Hillary Clinton is.