Yeah, I remember them doing this with the radical leftist and Jeremiah Wright acolyte named Barack obama, don't you?

The editorial board of The Boston Globe is using a satirical front page to express its uneasiness with a potential Donald Trump presidency.

The newspaper has printed a satirical front page for its Sunday "Ideas" section. The page is dated April 9, 2017, and features a large photo of Trump below dominant headline that reads "Deportations to Begin." The accompanying story has Trump calling on Congress to fund a deportation program amid protests.

Another article focuses on a plunging stock market. Some jokes are included, such as a mention of Yellowstone National Park being renamed for Trump.

The Globe itself offers the following rationale for its idiocy (no link, Google it):

It is easy to find historical antecedents [to Trump]. The rise of demagogic strongmen is an all too common phenomenon on our small planet. And what marks each of those dark episodes is a failure to fathom where a leader’s vision leads, to carry rhetoric to its logical conclusion. The satirical front page of this section attempts to do just that, to envision what America looks like with Trump in the White House. 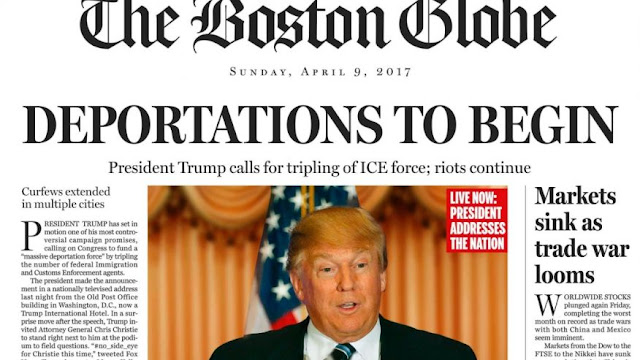 It is an exercise in taking a man at his word. And his vision of America promises to be as appalling in real life as it is in black and white on the page. It is a vision that demands an active and engaged opposition. It requires an opposition as focused on denying Trump the White House as the candidate is flippant and reckless about securing it.

After Wisconsin, the odds have shrunk that Trump will arrive in Cleveland with the requisite 1,237 delegates needed to win the nomination outright. Yet if he’s denied that nomination for falling short of the required delegates, Trump has warned, “You’d have riots. I think you’d have riots.” Indeed, who knows what Trump’s fervent backers are capable of if emboldened by the defeat of their strongman at the hands of the hated party elite.

Odd that the Globe finds time to predict future scandals and outrageous behavior when the current resident of 1600 Pennsylvania Ave. runs the most lawless and dictatorial Executive Branch in American history, bar none.

From wiretapping 100 AP reports to unilaterally declaring the millions of illegal aliens are suddenly lawful residents; from running thousands of assault weapons to the Mexican drug cartels in order to undermine the Second Amendment to ramming an unconstitutional takeover of the entire health care industry; from using the IRS to target political opponents to lying to the American people about the murder of a U.S. Ambassador... no president has been as intertwined in criminal behavior as Barack Obama.

Pity the Globe's editors can't extricate its craniofacial features from its posterior to pontificate about that.

You know you're ovel the target when you're taking flak .
Mr. Trump has got 'em all going crazy.
.

I sure don't have any problem with that