Celebrate the rise of Red China with this lovely collector's item

Nothing says "I'm celebrating the 60th anniversary of the rise of Communist China" like a solid gold Leica MP camera that costs more than a house in Motown.

...in commemoration of the 60th anniversary of the People's Republic of China, the camera company [is releasing] this 24 carat gold-plated shooter. Limited to a run of 60, each hallmarked with a year between 1949 and 2009, the Golden Camera is encased in red calfskin, bears an inscription of Mao Zedong's favorite slogan, and sports a Summilux-M 50mm f/1.4 lens. 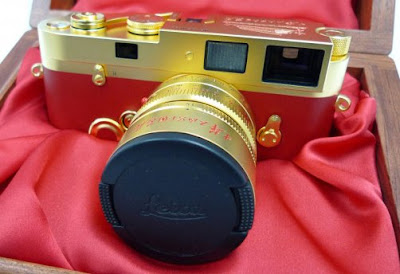 To max out the gaudiness, you also get a wooden box to store your equipment in. Sold exclusively in mainland China, these will cost 199,900 Chinese Yuan ($29,300) each, though Leica is also bringing out limited edition M8.2 and D-Lux 4 models -- sans any precious metals -- for the more budget-conscious patriots out there.

While China's government may not be as good as the Democrats at rah-rah posters, hopey-changey slogans and party apparatchiks, they certainly don't play a second fiddle when it comes to capitalism.

at 6:57 PM
Email ThisBlogThis!Share to TwitterShare to FacebookShare to Pinterest
Labels: Art