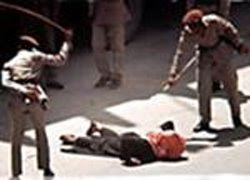 JEDDAH – A court in Ras sentenced a Saudi woman Wednesday to one-and-a half years in prison and 300 lashes of the whip for filing false complaints against government officials and further threatened to “strip her of her Saudi nationality” if she repeated the offence.

The woman was also charged with making visits to government offices over a case against her husband without the company of a legal male guardian.

The woman, who intends to appeal the ruling, has received an official copy of the verdict’s details and now has ten days to appeal... If upheld, the ruling will not be subject to pardon - according to the court - and the lashes will be administered at intervals during her prison term.

According to her husband, the convicted woman is currently being held in prison with their baby girl.

I'm trying to add some snark here, but coming up empty.

at 7:47 PM
Email ThisBlogThis!Share to TwitterShare to FacebookShare to Pinterest
Labels: extremism, World