This afternoon, President Obama visited Massachusetts in a last-ditch effort to save Martha Coakley's disastrous campaign for

. Doesn't he look ecstatic to be there? 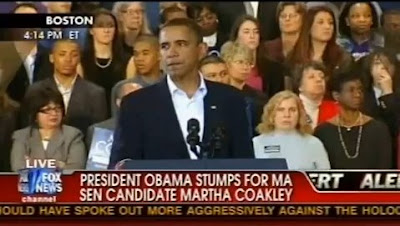 Oops. Since Scott Brown is a Lieutenant Colonel in the Army National Guard, it should be quite apparent he's been fighting for them.

“People who I never in a million years thought would have voted Republican are going to him,” said Rhonda Serre, a mother of two who has lost her job but still supports the Democrats. On Friday Brown was joined by Rudy Giuliani, the former mayor of New York. “This election will send a signal and a very dramatic one,” Giuliani said. “Believe me, the Democrats are frightened.”

Most analysts still believe the Democrats can win. But even a narrow defeat will be portrayed as a victory by the Republicans. Brown’s Senate campaign is already being studied by party strategists as a model. “He’s making healthcare a front-and-centre issue in the most liberal state in the country and it’s working for him,” said Whit Ayres, co-founder of Resurgent Republic, a group of conservative strategists.

“It’s the albatross around the Democrats’ necks.”

The sources added that the advisers are still hopeful that Obama's visit to Massachusetts on Sunday - coupled with a late push by Democratic activists - could help Coakley pull out a narrow victory in an increasingly tight race against Republican state Sen. Scott Brown.

However, the presidential advisers have grown increasingly pessimistic in the last three days about Coakley's chances after a series of missteps by the candidate, sources said.

InTrade now has Brown trading at 65, a five-point lift over the last 90 minutes alone.


Update via Twitter: "Overheard in Coakley camp 'I wanted Whitey Bulger not Obama to stop by'". Heh.

How about Your RECORD Mr. President....oh...I forgot, we don't know anything about YOUR record..How dare you attack an honorable, honest man...when we know nothing of your birth, school records..etc..Go home, and make yourself useful...go visit Haiti where people there consider you a hero.

Now the hint of a slow count and a fast health care vote. I guess it's government vs. the people. Its a reversal of civilization. The return to the form government that ruled the world for most of history.