President Obama weighs in with a critical observation on the Middle East peace process: "Dude, this is really hard!!"

To: Fools rush in Dept.
cc: So little time, so many fiascos Dept.
bcc: Rahm Emanuel 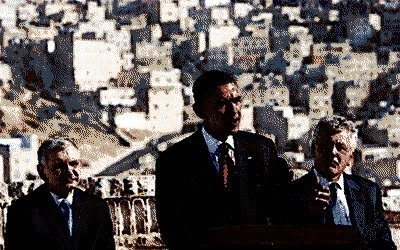 [Israeli] Prime Minister Binyamin Netanyahu met US Mideast envoy George Mitchell Thursday night, a few hours after Time magazine published an interview with US President Barack Obama in which he admitted that he erred during his first year in office by raising too high expectations of a Middle East breakthrough.

"I'll be honest with you, this is just really hard," Obama said when asked about the Middle East. For all his administration's early engagement in the conflict, he acknowledged, things were not where he would want them to be.

"This is as intractable a problem as you get," Obama said. "Both sides - the Israelis and the Palestinians - have found that the political environment, the nature of their coalitions or the divisions within their societies were such that it was very hard for them to start engaging in a meaningful conversation. And I think that we overestimated our ability to persuade them to do so when their politics ran contrary to that."

Dan observes that this is simply another case of the Chosen One getting everything backwards: "You don’t try this stunt until the last year of your last term, when you have nothing to lose - not the other way around."