Preaching to The Converted: Osama to Obama 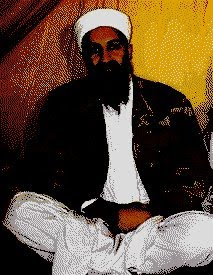 In [a] minute-long recording carried by Al-Jazeera Arabic news channel, bin Laden addressed President Barack Obama saying the Christmas attack was meant to send a message similar to that of the Sept. 11 attacks.

"The message delivered to you through the plane of the heroic warrior Umar Farouk Abdulmutallab was a confirmation of the previous messages sent by the heroes of the Sept. 11," he said of the Nigerian suspect in the Dec. 25 botched attack.

"If our messages had been able to reach you through words we wouldn't have been delivering them through planes."

Directing his statements at President Barack Obama — "from Osama to Obama," he said — bin Laden added: "America will never dream of security unless we will have it in reality in Palestine."

"God willing, our raids on you will continue as long as your support for the Israelis continues."

Dan from New York adds, "Obama to Osama: 'Roger that. Why do you think I got the blabbermouth a good lawyer?'"