ANDREW KLAVAN: Lays Down the Real Real on Washington Scandals

It now seems clear that Barack Obama was a corrupt machine politician in the worst Chicago mold. He used the IRS to silence his enemies, and the Justice Department to protect his friends. His two major "achievements" — a health care law that doesn't work and a deal that increased the power and prestige of the terrorist state of Iran — were built on lies to the public and manipulation of the press. And that's according to his own allies! Only the leftist bias and racial pathology of the media kept his administration from being destroyed by scandal, as it surely would have been had he been a white Republican.

I don't mention this to bring up old grudges, but for what it says about the current moment and the week just passed. Here's some of what we recently learned:

Former FBI Director James Comey's Senate testimony concerning former Attorney General Loretta Lynch's corruption confirmed our worst suspicions about the Obama DOJ. In an apparent attempt to help Hillary Clinton's campaign, Lynch told Comey to refer to the investigation into Hillary Clinton's abuse of classified material as "a matter" rather than an investigation. And, as we already knew but Comey confirmed, Lynch's secret tarmac meeting with Bill Clinton so underscored Comey's sense of her crookedness that the self-serving drama queen Comey actually went around her to publicly declare Hillary guilty-but-not-guilty... 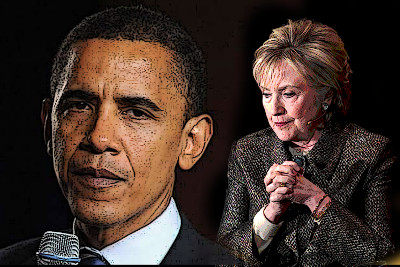 ...But all that was nothing compared to the brutal, nearly 300-page report released last week by the House Oversight and Government Reform Committee, a report absolutely blasting the previous Obama AG, Eric Holder. The report details how Holder and the Obama administration labored to cover up the details of the Fast and Furious gun-running scandal — a scandal which, unlike the non-collusion-with-Russia non-scandal, was implicated in the murder of an American law officer. Even the mom of the slain officer couldn't get the truth out of Holder and his cronies. The report says Holder considered the officer's family a "nuisance" because they were trying to get him to tell them how exactly the lawman died at the hands of gangsters who were wielding guns Obama's DOJ had allowed them to buy.

...[Remember,] Holder was also the first attorney general ever to be held in contempt of Congress for not turning over documents relating to Fast and Furious. And, speaking of obstruction of justice — we were speaking of obstruction of justice, weren't we? — President Obama asserted executive privilege to make it easier for Holder to keep those docs in the dark ... !

...So let's remember. Obama is the nefarious machine pol who appointed James Comey to head the FBI in the first place. This is the Comey who took no notes when he spoke with Obama, no notes when he questioned Hillary about her emails, no notes, apparently, during the cover-up conversation with Lynch that left him with "a queasy feeling," but who suddenly began documenting his exchanges with Trump — exchanges that Trump says never happened. This is the Comey who let Hillary off the hook because he somehow knew she didn't intend to share classified information (a matter that doesn't exist in the relevant law), but who cannot comment on whether Donald Trump intended to obstruct justice when Trump expressed his hopes about an investigation.

And the Obama administration — this crooked gang of liars and colluders — this is the gang that was deemed "scandal free" by virtually every "mainstream" news outlet. Indeed, investigative reporter Sharyl Attkisson had to leave CBS News in large part because CBS would not run her work on Fast and Furious.

As they say in the big leagues, read the whole thing. And you can listen to Andrew Klavan's excellent podcast every Monday through Thursday.

Does this mean that we will be able to enjoy more Kabuki theater in congress?
I really like Trey as the main character...