Judicial Watch announced today that it filed a motion in opposition to the Tillerson State Department’s motion to dismiss a lawsuit challenging its failure to take any action to recover emails of former Secretary of State Hillary Clinton and other employees unlawfully removed from the agency (Judicial Watch, Inc. v. Rex Tillerson (No. 1:15-cv-00785)). The lawsuit seeks to force State Department compliance with the Federal Records Act (FRA). The Trump administration continues to object to taking this strong action to recover Clinton’s emails.

On April 30, 2015, Judicial Watch sued former Secretary John Kerry after the State Department failed to take action on a letter sent to Kerry “notifying him of the unlawful removal of the Clinton emails and requesting that he initiate enforcement action pursuant to the [Federal Records Act],” including working through the Attorney General to recover the emails. 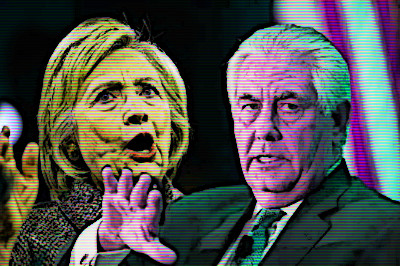 After initially being dismissed by the district court, Judicial Watch’s lawsuit was revived on appeal by the U.S. Court of Appeals for the District of Columbia Circuit on December 27, 2016.

The Trump administration is now defending handling of the email matter by the Obama administration and last month filed a declaration from the FBI trying to justify the State Department’s refusal to follow the law and refer to the Clinton email issue to the Justice Department. (The Federal Records Act states that an agency head “shall” initiate an action through the Attorney General when he becomes aware of any unlawful removal of agency records.)

Judicial Watch argues the State Department and FBI never bothered to do a full search for Hillary Clinton’s government emails. For example:

Secretary Clinton communicated through email with at least 138 persons outside the State Department about State Department business) …There is a high degree of probability that at least some of the emails not yet recovered were sent between at least some of these individuals and Secretary Clinton… It is also worth noting that the FBI itself has discovered that thousands of emails remain to be recovered. Recently released notes of an FBI agent involved in the Clinton investigation show that thousands of emails between David Petreaus and Clinton and thousands more between CENTCOM and Clinton were not returned. A State Department employee informed the FBI that “there are 1000 emails between HRC + Petreaus; most not in 30K.” Another “1000 emails” with CENTCOM and Clinton were not returned.

“It is astonishing the Trump administration is defending Hillary Clinton’s email scheme in federal court,” said Judicial Watch President Tom Fitton. “The State Department should initiate action with the Justice Department – and both agencies should finally take the necessary steps to recover all the government emails Hillary Clinton unlawfully removed.”

Between politicians taking care of each other, and there really only being one party, you get what you get. Stop putting faith in politics. They really isn't an America anymore. Trump, while he hedges a bit, isn't really planning to do anything that wasn't being done. The Paris accord will just be trimmed a bit, as with obamacare. They aren't going to change anything substantial. You do realize, government healthcare means not just power, but the ability to eliminate anyone they don't like directly. Though I think they will be aiming that at the boomers more than anyone else, and shortly. I don't think they will just be letting them die, either.

When they see how much they save through eliminations, they'll go whole hog. Look to Japan to start it off. There is no group greedier than socialists and communists.