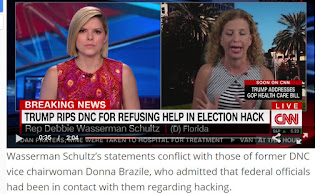 Florida Congresswoman Debbie Wasserman Schultz accused ex-DHS Secretary Jeh Johnson of lying under oath when he said the DNC refused the help of the DHS in their hacking scandal.

Johnson said during testimony in front of the House Intelligence Committee Wednesday that the Democratic National Committee refused DHS help with Russian hacking and opted not to turn over their hacked servers.

However, in a Thursday interview on CNN, Wasserman Schultz accused him of being “misinformed,” and said the DNC was never even made aware that their network had been compromised.

“He’s wrong in every respect,” Wasserman Schultz said. “At no point during my tenure at the DNC was I contacted by the FBI, DHS, or any government agency or alerted or made aware that they believed that the Russians–an enemy state–was intruding on our network.”

According to Wasserman Schultz, the only information they got about Russia hacking was through a phone call made to their tech support line.

“Secretary Johnson says the DNC rebuffed the help they offered,” CNN host Kate Bolduan pushed back. “You’re saying no one ever contacted you…”

Wasserman Schultz’s statements conflict with those of former DNC vice chairwoman Donna Brazile, who admitted that federal officials had been in contact with them regarding hacking.

“I talked to the general counsel of the DNC today and he assures me that every step along the way when we were notified of these issues that we changed systems, changed procedures,” Brazile told CNN last summer. “…at no time did we ignore the warning from the FBI or any other federal officials.”