Special Counsel Robert Mueller, who has been sainted by the establishment, is a longtime and very close friend of Jim Comey’s, the easily “stunned” and “confused” former FBI director. Mueller’s begun hiring members of his investigative team and at least four of them are Barack Obama and Hillary Clinton donors.

The National Law Journal reported that Mueller has tapped on a part-time basis Deputy Solicitor General Michael Dreeben, regarded as one of the best government attorneys in the country. Dreeben also donated in 2008 to the Barack Obama PAC and in 2006 to the Hillary Clinton PAC.

Mueller reportedly hired Andrew Weissmann, head of the fraud section in the DOJ Criminal Division. Weissman led the Enron Task Force from 2002-2005, overseeing the investigations and prosecutions of dozens of individuals including Republican Kenneth Lay.

Weissman donated six times to PACs for Obama’s presidential campaign as well as the DNC in 2006.

Jeannie Rhee, former deputy assistant attorney general, donated to the Democratic National Committee as well as campaign PACs Obama in 2008 and 2011, and Clinton’s campaign in 2015 and 2016.

James Quarles, who worked as an assistant special prosecutor on the Watergate Special Prosecution Force and who also works as an attorney at WilmerHale with Rhee, has a long record of donating to Democratic groups starting in 1987 for the PAC Dukakis for President. In 2016, he donated to Clinton’s PAC Hillary for America.

Comey leaked a memo to manipulate the investigation 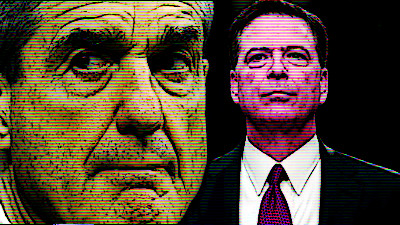 Former FBI director Jim Comey leaked a memo of a privileged communication with the President to manipulate the administration into appointing a special counsel. He wasn’t interested in investigating leaks because he’s one of the leakers.

That should end the special counsel but it won’t.

Comey was interested in having a special counsel who just happens to be his friend Robert Mueller.

Comey is a very close friend of Robert Mueller’s. For the past 15 years, the two men have been described as “brothers in arms.” Their work together during the controversies over Bush-era terrorist surveillance has been characterized as “deepening a friendship forged in the crucible of the highest levels of the national security apparatus after the 9/11 attacks,” after which the men became “close partners and close allies throughout the years ahead.”

Jeff Sessions was made to recuse himself but Comey’s friend is acceptable?

Mueller was not fair to targeted conservatives

As FBI Director, Mueller is the investigator who was unaware of the IRS targeting of conservative groups.

The Obama IRS targeted conservative organizations and during a June 2013 hearing he refused to answer or was possibly completely unaware of any investigation.

“This is the most important issue in front of the country in the last six weeks, and you don’t know who the lead investigator is?” Jordan asked, sounding shocked.

“At this juncture, no I do not,” Mueller responded.

“I don’t know what the status of the interviews are by the team that’s on it,” Mueller said.

The victims of the targeting had not been interviewed by the IRS.

Mueller can keep the investigation going for years

Under terms of his appointment by Deputy Attorney General Rod Rosenstein, Mueller will have wide powers to investigate “any links and/or coordination between the Russian government and individuals associated with the campaign of President Donald Trump” and—beyond that—“any matters” that arise from the investigation, including perjury and obstruction of justice.

He can keep the fishing expedition going for years and take it anywhere he wants under the authority given him by Rod Rosenstein.

If the Democrats take back the House in 2018, they will be perfectly prepared for impeachment.

Mueller is winning accolades, particularly from the left, but not everyone agrees

Former Senator Bob Graham of Florida, the Democrat who ran the joint Senate-House congressional investigation of pre-9/11 intelligence failures, said in an interview that while he was pleased by the appointment of a special prosecutor to investigate Russian meddling in 2016 election, he questioned the choice of Mueller.

“I did not have a good relationship with Mueller during the 9/11 investigation,” he said. “I have some concerns that he will in fact be fully independent, based on what I observed 15 years ago.”

Graham has long been critical of what he says are Mueller’s repeated attempts to protect the bureau from embarrassment over its pre-9/11 failures as well as the former FBI director’s failure to hold the government of Saudi Arabia accountable for its possible ties to the hijackers.

“I think this is going to be a witch hunt…I distrust independent counsels.” ~ @newtgingrich pic.twitter.com/BtZlKXtgKy

With due deference to Gingrich, the Salem Witch (Hunt) Trials were a shining example of responsible jurisprudence compared to the current clown posse going after Trump.