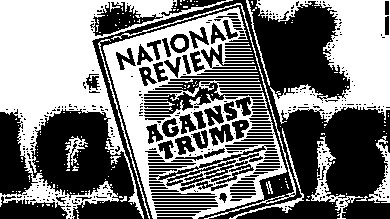 As the history of the Trump-Russia collusion hoax is being written, one group deserves a vaunted perch atop the proverbial Hall of Shame: NeverTrump “conservatives.”

For nearly three years, these Trump-hating propagandists on the Right have aided the most mendacious forces on the Left in a grievous attempt to take down the Republican president of the United States. While they preened, prattled, and proselytized about how much better they are than deplorable Trumpists, NeverTrumpers en masse abandoned their so-called traditional conservative principles in order to aid a Hillary Clinton-DNC-Obama Administration scheme to destroy the political pariah who won the presidency over their collective objection.

In the process, they tried to rewrite the fundamental tenets of American conservatism. Behavior that once would’ve sparked outrage in conservative quarters has been normalized, even justified, by self-proclaimed conservatives.

The emotional restraint and intellectual mooring that once distinguished Beltway conservatives from their counterparts on the Left is gone. Instead, the NeverTrump Russia conspiracy theorists have been as unhinged, gullible, and dishonest as the most craven commentator on MSNBC or in the Washington Post.

This rogue’s gallery includes people who at one time were some of the most trusted influencers in the Republican Party. Bill Kristol, the founder of the now-defunct Weekly Standard, accepted hundreds of thousands of dollars from a left-wing tech billionaire and Trump foe to “defend” the work of Special Counsel Robert Mueller. He was in on the Russian collusion story from the beginning, clearly parroting Fusion GPS talking points in a July 2016 article, “Putin’s Party.”

Kristol, now the editor-at-large of what appears to be a satirical “conservative” blog called The Bulwark, has an obsession with Russian collusion that borders on insanity; in November, he tweeted a remake of a “Fiddler on the Roof” tune to include the word “collusion” several times. Just last month, he posted an article about Paul Manafort’s 2016 meeting with an alleged Russian political operative at a D.C. cigar with a one-word title: “Collusion,” he tweeted. (He has dozens of tweets with the word “collusion.”)

When Trump’s former attorney, Michael Cohen, pleaded guilty in August 2018, Kristol once again predicted doom for the president. “How do we know it is not Russia?” Kristol warned on MSNBC. “Michael Cohen may well know about the Trump Tower meeting . . . and Cohen was in touch with Trump throughout 2015 and 2016. I don’t really buy the argument that this isn’t important for the Russia side.”

Kristol’s Trump-Russia collusion fixation has been shared by his pals Jonah Goldberg and David French at National Review. Although Goldberg has publicly insisted he is a “collusion skeptic,” he has promoted several collusion plotlines, including the June 2016 Trump Tower meeting between Russian lobbyists and Trump’s campaign team, including the president’s oldest son.

“I think it is collusion,” Goldberg said in August 2018 during a Fox News radio interview, even as the interviewer explained how the meeting was clearly set-up by Fusion GPS chief Glenn Simpson. “I do think Donald Trump Jr. is in trouble . . . if he was led to believe that he was gonna get stuff that was illegally stolen from Hillary Clinton’s server or from the DNC server and that he was looking forward to getting it.” (There is no mention of emails or any server in the exchanges between Don Jr. and the intermediary.)

Goldberg then weirdly claimed, “I understand that [Don Jr.] said some things under oath to Congress about what his state of mind was going into all this.” How did he “understand” this? Was Adam Schiff was leaking private testimony to Goldberg?

Goldberg also mocked the idea that the Obama Justice Department enlisted spies to infiltrate the campaign, and claimed that Carter Page and George Papadopoulos had “expressed an eagerness to work with a foreign power, Russia.” He repeatedly suggested that Trump and his associates were behaving like men with “something to hide” about Russian collusion.

Then this in May 2018: “Meanwhile, the argument that President Trump secretly colluded with the Russians to beat Clinton has more plausibility than those shouting ‘conspiracy theory!’ and ‘witch hunt!’ are willing to entertain,” Goldberg wrote, while dismissing the real evidence about the origins of the Russiagate scandal. “In the New York Times’ telling of the story, the investigations into the Trump campaign were a necessary and good-faith effort to discern whether a foreign power had infiltrated the Trump campaign. For those who subscribe to a Hannitized version of reality, this was a lawless extension of the Deep State’s plot to thwart Trump and protect Clinton.”

Goldberg, for his part, now denies his role in spreading conspiracy theories and redirecting his aim at critics of Mueller. “I watched people on both sides of this beclown themselves with hysteria. I’ve got nothing to apologize for,” he tweeted on Saturday.

David French also has been a Russian collusion propagandist, hysterically insisting that the June 2016 Trump Tower meeting was “evidence that senior members of the Trump campaign tried unsuccessfully to facilitate Russian government efforts to defeat Hillary Clinton.” Commenting on Mueller’s list of questions for the president, French claimed that the line of inquiry “stopped me in my tracks and made me wonder if there were material facts we don’t know.” Without irony, French chided the notion that no collusion existed because “it’s totally fine to get oppo research from a hostile foreign power.”

Perhaps most embarrassing for French was his breathless attempt to legitimize a bogus BuzzFeed report in January 2019 that Donald Trump directed Cohen to lie to Congress. Based on innuendo in Cohen’s sentencing memo, French compared the false testimony allegation to those that led to impeachment charges against Bill Clinton and Richard Nixon. “It also strongly hints at potential presidential jeopardy for misconduct that has clear echoes in recent presidential scandals,” French wrote. A month later, Cohen denied that Trump told him to lie to Congress.

There are other lesser-known NeverTrumpers who have peddled the collusion hoax over the past two years: Tom Nichols, Jennifer Rubin, Evan McMullin, and Rick Wilson to name a few. None of them appears to be backing down or owning up to their own participation in this seditious plot.

“The president of the United States was helped into his job by clandestine Russian attacks on the American political process,” former Bush speechwriter David Frum wrote in The Atlantic over the weekend. “That core truth is surrounded by other disturbing probabilities, such as the likelihood that Putin even now is exerting leverage over Trump in some way.”

What the Trump-Russia collusion hoax has laid bare is that so many of the people who Republicans trusted and respected for two decades were undeserving. They are as fundamentally dishonest and intentionally ignorant as the those on the Left. Their animus for the president and his supporters exceeds that of the most faithful Democratic partisan. Their eager participation in the greatest political scandal in American history—intended to overthrow a Republican president—should never be forgotten. Or forgiven.

Well said! To call the liberal GOP conservative is to smear Barry + Ronny. Which is clearly what the progressives who call these liberals "conservative" intend! they hated Ronny in '79 and Barry in '64!

That many of these liberals who falsely call themselves conservative, are obliquely backing either Pocahantus or Bernie should, but clearly does not, prove they hate conservatives. And are really far left progressives.