This morning, Adam Schiff reminded everyone why he cannot be trusted.

But first, a bit of history: While peddling the Russia hoax, Schiff claimed repeatedly there was “evidence of collusion” but as the Mueller Report made clear, no collusion was found.

Schiff also said the Russia hoax was “of a size and scope probably beyond Watergate.” Reminder for Schiff, there was no collusion and no obstruction.

Now Schiff has found a new tale to slander President Trump with after lying to the country for over two and a half years about Russia without any consequences.

And like clockwork, Schiff started pushing his Ukraine smear by lying right out of the gate by fabricating what was said on the call between President Trump and the Ukrainian president.

This morning, when Schiff was confronted by ABC’s George Stephanopoulos for “making up” President Trump’s phone call with the Ukrainian Prime minister, he refused to be accountable for his deliberate fabrication. 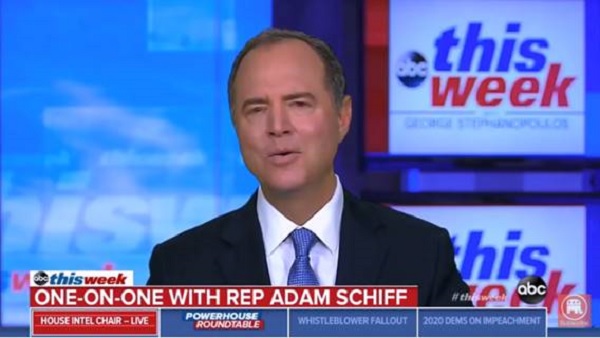 A reminder for everyone: The call transcript showed there was no quid pro quo, nothing inappropriate was mentioned on the call, and no threats were made.

Stop the madness: Schiff’s refusal to own up to flagrantly misleading the American people is a disgrace to him and his office and he should resign.

What if Hillary’s spies heard the word “CrowdStrike” and then went out a recruited someone to be a “whistleblower” under the crooked new rules.

They may have even had the entire transcript, but to hide the Deep Mole spy, they said it was second-hand hear-say. Even the inclusion of mistakes such as which ambassadors were in on the call were probably included to mask the real spy and possibly shift suspicion to an innocent staffer.

Have the truth in front of you, don't like it because you can't find anything wrong so the solution is to fabricate a lie into the truth and hope that the masses believe you, yep true democrat behavior..sleezy, deceitful, manipulation of the masses all behaviors that the democrat party accuses President Trump of doing yet he is not.

The President’s lawyers should plan on calling Schiff as an adverse witness in the impeachment trial before the Senate. They can play his words and calls for impeachment and have him confirm he was lying. Over and over again. And while he was telling these lies in the court of public opinion he was plotting and scheming with lawyers for a “whistleblower” who had no firsthand knowledge of his allegations and that the allegations contain lies. Schiff can then be asked when he became aware of each lie.
Lawyers better than me can think of better ways to do it and no, Schiff does not have a privilege against testifying.

@Trialdog... outstanding suggestion. i will make sure that moves up the food chain in the unlikely event that the Police State Democrats get that far.