THE SCHIFF DOSSIER: Which is a Better Description of This Error-Filled "Whistleblower" Report

Fred Fleitz is a former National Security Council member and ex-CIA Analyst. He appears to have been one of the few individuals who have actually edited transcripts of presidential phone calls with foreign dignitaries. Earlier today, he had a fascinating take on the "Whistleblower" report (emphases mine): 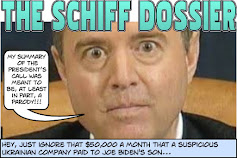 As a former CIA analyst and former NSC official who edited transcripts of POTUS phone calls with foreign leaders, here are my thoughts on the whistleblower complaint which was just released. . . [Link]

It appears that rules restricting access and knowledge of these sensitive calls was breached. This official was not on this call, not on the approved dissem[ination] list and should not have been briefed on the call. The way this complaint was written suggested the author had a lot of help. I know from my work on the House Intel Commitee staff that many whistleblowers go directly to the intel oversight committees. Did this whistleblower first meet with House Intel committee members?

It is therefore important that Congress find out where this complaint came from. What did House and Senate intel committee dem members and staff know about it and when? Did they help orchestrate this complaint?

My view is that this whistleblower complaint is too convenient and too perfect to come from a typical whistleblower. Were other IC officers involved? Were outside groups opposed to the president involved?

This complaint will further damage IC relations with the White House for many years to come because IC officers appear to be politicizing presidential phone calls with foreign officials and their access to the president and his activities in the White House.

Worst of all, this IC officer -- and probably others -- have blatantly crossed the line into policy. This violates a core responsibility of IC officers is to inform, but not make policy.

This is such a grevious violation of trust between the IC and the White House that it would not surprise me if IC officers are barred from all access to POTUS phone calls with foreign officials.

But never mind the fact that John Solomon has copiously documented the fact that Biden bragged about getting a Ukrainian prosecutor fired -- not for "corruption", as internal documents make clear, but -- for investigating the money-laundering machine that enriched his son and, coincidentally (*cough*) John Kerry's stepson.

Nothing to see here, folks, just move along. They're serving the new Pumpkin Spice Lattes over at Starbucks, just head over there if you would.

I hope Ned Price stays away from alleys and dumpsters.

Joe Bidet got a Ukrainian prosecutor fired to stop an investigation into Bidet Junior's criminal activity? Correct me if I'm wrong, but that sounds an awful lot like "obstruction of justice" to me.