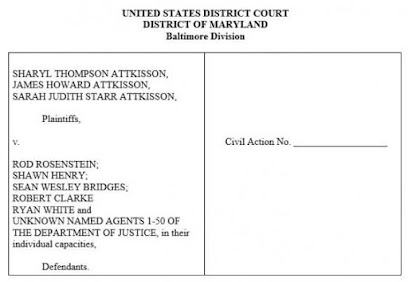 In a federal lawsuit filed this week, Former Deputy Attorney General Rod Rosentein has been implicated in yet another improper government spy operation.

According to the complaint—filed in United States District Court in Baltimore, Maryland—Rosenstein led “a multi-agency task force in Baltimore that conducted surveillance of the Attkissons’ computer systems” and “used USPS IP addresses on other occasions to conduct operations.”

The complaint states that all of the defendants “were agents and/or employees of the United States Government working with Rosenstein” to conduct “the unlawful surveillance and hacking of the computer systems of the Plaintiffs.”

In June of 2017, Rosenstein signed off on the fourth and final application for the improper FISA warrant to spy on former Trump campaign adviser Carter Page. A month earlier, he offered to wear a wire to spy on President Trump when he visited the Oval Office, although he later claimed that he was just joking.

Attkisson took to Twitter Thursday to explain in a video update about her case that she had just filed a new lawsuit in her years long fight “to hold the government agents accountable for the intrusions into my computer.”

Multiple forensic exams show that numerous electronic devices used by Attkisson and her family during this time frame were hacked or remotely compromised. Unauthorized parties used government Internet Protocol (IP) addresses to access Attkisson’s computers; placed government surveillance spyware on her devices; and illegally accessed her professional and personal information over an extended period of time.

The summary states that in March of 2019, an appellate panel of three judges determined the former Attorney General Eric Holder had immunity from Attkisson’s claims.

Two of the three judges ruled Attkisson’s claims should be dismissed because she took too long, three years— and without success—to determine the names of the “John Doe” federal agents involved in the intrusions of her computers.

A third judge rightly dissented, understanding that Attkisson consistently attempted to identify the John Does but the Department of Justice continuously blocked discovery, filed protective orders and filed motions to dismiss in an attempt to obstruct. The government did not turn over a single piece of paper in response to more than a dozen subpoenas.

The dissenting judge called the government’s actions “Kafkaesque” for obstructing Attkisson and then blaming her for “taking too long.”

“We have just filed a new complaint which I hope satisfies one of the issues a judge had that we’ve not been able to name the actual names of the government agents involved in the intrusion,” Attkison announced in her video. “Of course we argued we could not name the names because the government and courts would not permit us discovery to learn the names!”

She added: “We did some additional detective work. We have five names to present to the court—names based on our information that were directly involved in the surveillance of my computers. One of them is Rod Rosenstein, then U.S. Attorney in Baltimore, a former Department of Justice official.”

Besides Attkisson, the other plaintiffs in the case are her husband and daughter who were also subjected to the illegal surveillance.

Besides Rosenstein, the other defendants named in the complaint are Shawn Henry, Sean Wesley Bridges, Robert Clarke, and Ryan White.

Henry left the FBI in 2012 and now is president of CrowdStrike Services, the cybersecurity firm hired by Democratic National Committee to examine its computer network in 2016 after it had been hacked. Crowdstrike ultimately determined Russia had hacked the DNC emails.

Shaun Wesley Bridges served as a Special Agent with the U.S. Secret Service for approximately six years, according to the complaint.

Between 2012 and 2014, he was assigned to the Baltimore Silk Road Task Force, a multi-agency group investigating illegal activity on the Silk Road, a covert online marketplace for illicit goods, including drugs.

In 2015 and 2017, Bridges was convicted of corruption related to his government work, and is now serving a prison sentence.

Defendant Robert Clarke was also a member of the Silk Road Task Force and Ryan White worked as an undercover informant for the DOJ.

White also worked as a contractor operating out of the Baltimore office under a group supervised by Rosenstein, according to the complaint.

In this capacity, White conducted work for the FBI, United States Secret Service, Drug Enforcement Administration and the Bureau of Alcohol Tobacco and Firearms, where he and others were ordered to illegally hack into computer systems, servers, emails and phones.

“These defendants, as Government-officials, agents or employees, violated the Constitution as shown herein through their own individual actions,” the complaint states.

The specialist quickly identified spyware proprietary to the federal government in Attkisson’s computer, according to Szwajkowski. He advised Attkisson that he and his intel associates were “shocked” that the government had used covert surveillance on a national journalist and he said they thought it was “outrageous.”

Szwajkowski says he reported to Attkisson that the analysis showed clear evidence that her computer was infiltrated with government spyware proprietary to the CIA, FBI or National Security Agency (NSA). Forensics indicated the particular intrusion uncovered by the analysis was accomplished through software attached to an otherwise innocuous email sent to Attkisson in February 2012.

Attkisson alleges that “numerous other Americans” were also targeted by Rosenstein’s unit while he was the U.S. Attorney in Baltimore, Maryland.