The Left has shown that the collusion exoneration last year by the heralded Robert Mueller investigation—all 22-months, the “dream team,” and $34 million of it—meant absolutely nothing.

Nor did it matter that Department of Justice Inspector General Michael Horowitz found no justification of “collusion” in the Steele dossier to justify the Foreign Intelligence Surveillance Act warrants it issued to spy on Carter Page.

Both the Mueller and Horowitz investigations confirmed that even the partisan and warped FBI “Crossfire Hurricane” intrigues could find no Russian-Trump collusion.

And yet the House impeachment managers cannot finish a sentence without exclaiming “Russian collusion,” as if it has now transmogrified into some exotic foundational myth.

Remember, no sooner had Mueller found no collusion between Trump’s 2016 presidential campaign and the Kremlin and no actionable obstruction than the progressives narrative was recalibrated into Ukrainian.

Yet it is now as if neither Mueller nor Horowitz ever existed, as if we have forgotten the thousands of hours of investigation that found no Russian collusion, but indeed discovered the systematic warping of the FISA court by allegations of such falsities. As if to prove that the Mueller investigation was never biased, Andrew Weissmann now appears on MSNBC as a legal analyst to continue what he once did for Mueller, in the manner of the post-Russian “collusion” careers of Andrew McCabe, James Comey, and James Clapper.

The Left is hooked on Trump and cannot quit him. If they cannot destroy him politically, they hope to destroy him physically.

In truth, impeachment started the very week Donald Trump was inaugurated by articles of impeachment introduced in the House of Representatives by 58 Democrats. 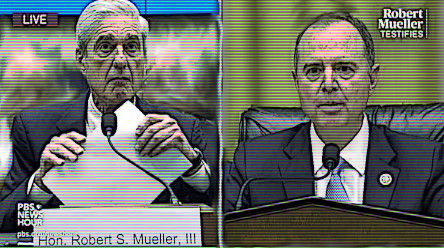 Between 2017 and 2019, one effort to remove Trump or members of his administration before the 2020 election followed rapidly and furiously upon another. Reason, logic, moderation, and common sense vanished, replaced by a shrill directive that Trump was evil and thus his administration had to be aborted by the good people, and by any means possible.

Meanwhile, fired FBI Director James Comey leaked confidential memos of conversations with the president, in an admitted—and successful—bid to secure a special counsel to investigate Trump for “Russian collusion.”

At times, various characters, such as the now-indicted Michael Avenatti and now-jailed former Trump lawyer Michael Cohen, swore Trump had broken various laws and would be removed from office. An indicted Lev Parnas now takes their place as the Democrats’ new and one real—though, again, criminal—truthteller.

Less formal but even more alarming efforts at removing or neutering Trump were embraced by the Washington elite, federal bureaucracy, and some Trump establishment appointees.

Former Obama official Rosa Brooks wrote an article discussing ways to remove Trump, including the idea of a military coup. An anonymous administration official penned a New York Times op-ed, and later a book, bragging that he was one of many officials in the executive branch trying to disrupt the operation of the administration. Apparently, all these misfits thought they were playing the role of Lieutenant Tom Keefer using his supposedly superior wit to take down a crazy Captain Queeg.

Several tell-all accounts from former Trump appointees, muckrakers, and Washington insider journalists variously alleged that Trump and his family were either criminally minded or unhinged. A “whistleblower” worked with House Intelligence Committee Chairman Adam Schiff (D-Calif.) to lodge a complaint against Trump, alleging second-hand knowledge of a Trump phone call, purportedly leveraging Ukrainian help in investigating supposed Hunter Biden corruption to release U.S. aid. The whistleblower now is mute and supposedly remains anonymous because if he were to identify himself and testify under oath, his motivations, activism, and prior relationships with Schiff and Joe Biden would transmogrify him from a cult hero into a conniving anti-Trump activist.

And on and on.

So what happens in the never-ending impeachment story, once the current impeachment indictment leads to an inevitable Senate vote of exoneration?

The Weakest Field in Decades

I mention these post-impeachment psychodramas because they are symptomatic of a sick Democratic patient. Yet the endless effort to destroy Trump before the election in the progressive mind has a certain logic given the current Democratic dilemma.

The Democratic Party is currently struggling with the weakest field of candidates since 1972 or 1984, well apart from the irony that a party that hectors the nation on proportional representation and disparate impact is fine with an all-white debating stage.

Joe Biden offers the only chance of winning the Midwest swing states. Yet he seems to be aging on the campaign trail exponentially, with 10 more—and more frantic—months of campaigning ahead.

Senator Bernie Sanders (I-Vt.) can certainly be nominated, but he cannot win, because the country knows that he would end the United States as we have known it. The scold Elizabeth Warren (D-Mass.), sanctimonious Pete Buttigieg, and chameleon billionaire Michael Bloomberg can only make the primary race interesting.

The Democratic platform will likely include the “Green New Deal,” a wealth tax, Medicare for All, tuition debt cancellation, higher income taxes, veritable open borders, an end to deportation and perhaps ICE as well, reparations, and a leftwing version of Obama’s failed foreign policy.

In other words, the Democratic agenda is weaker even than the unlucky candidate who will be expected to run on it.

Given those realities, there is a perverse logic in destroying Trump first, and worrying later about offering an alternative agenda. Democrats accept that if Trump is not removed from office, or is not mired in existential scandals, or not physically destroyed, he will likely win in November. The ensuing eight-year Trump reign would destroy not just the Obama legacy, but weaken the entire progressive project for a generation.

Because Trump is not a traditional Republican, the Democrats are bewildered over how to neuter him. His rally audiences are composed of about 40 percent Independents and Democrats. His entire China reset is predicated on saving manufacturing industries, blue-collar jobs, and the industrial heartland—the erstwhile heart of the old Democratic Party.

The supposedly racist Trump appeals to minorities in a way that previous Republican candidates have not, and in ways that transcend his record. For all his loudness and invective, Trump is seen as authentic. He is not condescending. The thought of Trump rolling his r’s or adopting a Hillary or Joe Biden inner-city patois is impossible. Being rough and genuine is usually seen as preferable to smooth and fake.

The Trump effort to stop illegal immigration and thus empower entry-level American job seekers, to fast track energy development, expand deregulation, recalibrate asymmetrical trade, and avoid expeditionary wars abroad have led not just to the strongest economy of the 21st century, but to a different sort of economy based on the idea of full-employment, energy independence, and changing the role of government from obstructer to promoter of free enterprise.

Democrats don’t talk up their alternate agenda because they know that more regulations, open borders, trade appeasement, banning fracking, and the green new deal, would be the very opposite of Trump’s plan and likely achieve the very opposite of Trump’s results. In this context, destroying Trump is not just the only viable trajectory for the Left, but it is also the only possible narrative. Again, to focus on the current left-wing agenda is slow-motion suicide.

The Democrats know that impeachment will not lead to a conviction. They accept that they are not gaining traction in the polls. They fear that Trump’s wounds heal quickly and what doesn’t destroy him can make him stronger.

So why continue? Again, there is little other alternative. Moreover, addicts do not act logically and the Left is hooked on Trump and cannot quit him. Finally, they hope to destroy Trump physically. He will be 74 in June. By the standards of senior medicine, they feel Trump is locked in a self-destructive cycle: little sleep, little exercise, poor diet, too heavy, too stressed.

Very few politicians in memory could physically endure the invective, hate, and furor aimed at Trump and his family daily over the last three years. Much less, could any president function with 90 percent negative media coverage, moles in the executive branch monitoring his every breath, and an unhinged opposition whose reason to get up in the morning is to end Trump.

The Democrats believe that one more whistleblower, just a bit more impeachment, a little more Nadler or Schiff, a pinch more of Pelosi, or another Ukrainian or Russian liar might finally give Trump a stroke or malignancy. With Trump debilitated, they might have a chance against a more traditional Republican.

We will be down to the elemental after impeachment: if you can’t beat Trump legislatively, judicially, or electorally, and if you can’t impeach, convict him and remove him, perhaps you can simply physically destroy him.

Please don't give the b*stards any ideas! I do hope he has some of his private security with him. For some reason, I lack confidence in the federal agencies to protect him.

Bookdoc said...
This comment has been removed by the author.
12:34 AM

You forgot the Democrats want abortion on demand probably up to and until the child turns 18, when the 18 year old can start voting for them.

@Professor Hansen: As we in the anon community receive not only directions where to dig up the truth we also receive updates on events current and past.

A question in 2017 by our military insider was posed and was thus: "What would happen of text messages between FBI agents here and their rogue operators overseas discussed various ways to assassinate president Trump and/or family members. Would these text be made public?"

The thousands of missing text messages contain that subject ergo the claim of losing these texts.
In reality a repeat of what they once before did to JFK was their insurance policy if all steps tried failed.

Recently we also learned that there is no step 5 after this impeachment farce goes up in smoke. This is it for them they have no other plans.

However during the past 3+ years the Trump administration, the military and the 'alliance' worldwide have set the stage to start draining the swamp. GITMO and two other prisons have been prepped for just this occasion and ready to go.

They have attempted to assassinate president Trump not once but more times than one can even fathom. One of them was beyond obvious to anyone having watched the news as it was on the day as the president on AF1 was on the way to Singapore meeting with the NK leader. A rogue missile targeted AF1 right over Alaska and was intercepted from by our guardians of the missile defense team.

I don't want to give any of them the pleasure to list the various attempts but we anons know.

If the dems don’t continue, they lose the next election. House and Presidency. They’ve no popular or intelligent platform to run on. Their press knows. The Dems and their press hope they can sway voters. 3-5%. That and they hope to hold their blocs. It’s long game mostly. For political survival.
The corruption has been understated. It’s much more wide and vast than that portrayed in The latest book. It’s not select friends and donors. It’s the friends, spouses, and children of not just the pols, but their staffers and appointees. They get into the best schools. They land comfortable jobs in businesses regulated and affiliated with government. And businesses not regulated by government but are run by politically connected people. It’s the elite privileged club and Trump threatens it all.