GRAPH: How the Most Powerful Branch of Government Could Control U.S. Public Policy

If you haven't read the thought-provoking series of articles on the intel community (IC) at The Conservative Treehouse, they are quite important (intro, part 1, part 2, and part 3). These articles inspired Biff Spackle to illustrate the new power structure in the United States, if the IC is indeed as corruptible and uncontrollable as it appears (click the image to zoom in). 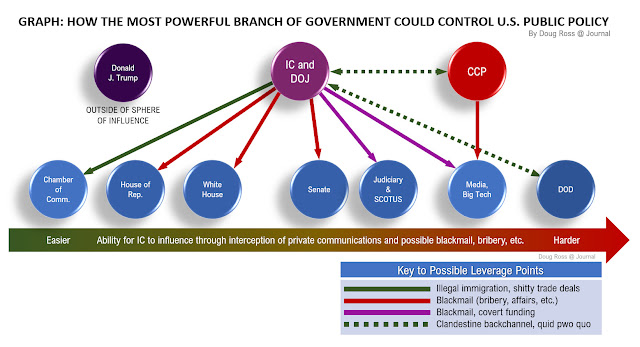 Now, some discussion points/questions for consideration:

An astute commenter adds some details for clarity into how potential spying on various individuals inside and outside government could lead to a serious imbalance in Constitutional power.

The question remains: are there any lawful remedies that could rein in this kind of untenable situation?

One: For instance, could a group of state attorneys general subpoena the head of the NSA -- and other actors -- for possible Fourth Amendment violations in their states)?

Two: Civil suits by those egregiously abused (e.g., Carter Page, Tucker Carlson, George Papadapoulous, and many others) by out-of-control actors?

Any other lawful and peaceful ideas are most welcome in the comments.

And if I happen to disappear tomorrow without notice, please let the indispensable Julie Kelly know.

Everything here is common sense. That makes it untenable to the Tyrants. They can't have that because then people will see them for what they are.