There's an important article over at Consortium News by longtime CIA analyst Ray McGovern, who prepared Presidential Daily Briefings for presidents Nixon, Ford and Reagan, and which highlights an interesting point I hadn't come across before.

Namely, that Hillary's use of an insecure personal email server -- that was almost certainly hacked by America's enemies -- could very well have exposed Ambassador Steven's lack of security in his Benghazi compound, thereby leading directly to the terror attack that killed four Americans. 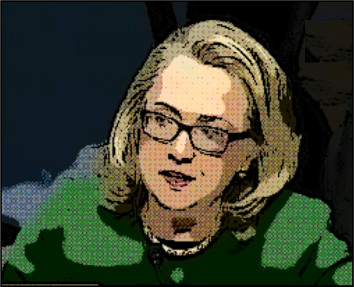 One very important, though as yet unmentioned, question is whether security lapses involving Clinton and her emails contributed to what Clinton has deemed her worst moment as Secretary of State, the killing of Ambassador Christopher Stevens and three other U.S. personnel at the lightly guarded U.S. “mission” (a very small, idiosyncratic, consulate-type complex not performing any consular affairs) in Benghazi, Libya, on Sept. 11, 2012.

Somehow the terrorists who mounted the assault were aware of the absence of meaningful security at the facility, though obviously there were other means for them to have made that determination, including the State Department’s reliance on unreliable local militias who might well have shared that inside information with the attackers.

However, if there is any indication that Clinton’s belatedly classified emails contained information about internal State Department discussions regarding the consulate’s security shortcomings, questions may be raised about whether that information was somehow compromised by a foreign intelligence agency and shared with the attackers.

We know that State Department bureaucrats under Secretary Clinton overruled repeated requests for additional security in Benghazi. We also know that Clinton disregarded NSA’s repeated warnings against the use of unencrypted communications...

One can only pray that the FBI exposes this crime family once and for all and terminates their political aspirations with extreme prejudice.

I just realized this the other day. It had escaped me, probably because it is just too simple:
Clinton also used an unsecured phone, and took that phone with her everywhere. Most likely, she used that phone to access her email and her server. The password for access to her email and server were probably stored on the phone. That phone went with her to China, Europe and the middle east. It was probably 'skimmed,' and in that likelihood, her password and thereby access to her server were gained. No hackjavascript:void(0)ing would have been necessary, other than 'skimming' the info from the phone. Someone/anyone could just logon to the server with that info. I know- no one would ever 'skim' a phone, right?
And I bet more than several of her deleted 'personal emails pertained to her corrupt brother and his participation in gaining mining interests in Haiti.
j in VT


Me thinks I Would like to offer tidbits to your reasoning...

1- The Muslim Brotherhood was in control of Egypt during September 2011.

2- POTUS, whereabouts are peculiary unknown during the night of
the BENGAZI misbehavior... As Sgt. Schultz would say "verrrrrrrrrrrry
interesting".

3- Anne W. Patterson just happened to be in the U.S. on this evening.
She was Ambassador to Egypt nominated by POTUS on On June 30, 2011
and was eventually EJECTED by Post Muslim Brotherhood Egyptian
President Abdel Fattah El-Sisi's goverment for funding and
supporting the Muslim Brotherhood. Oddly, she was subsequently
elevated in stature to assistant secretary of state in the State
Department’s Bureau of Near Eastern Affairs by POTUS B.O. Again...
as Sgt. Schultz would again say "verrrrrrrrrrrry interesting".
As a side note one of her subbordinates at the U.S. Egyptian Embassy
is credited with the petard about ... "it was an unknown, unseen video"
that caused the BENGAZI problem.

4- POTUS was preferential toward the Muslim Brotherhood control of
EGYPT as was Jarett, Clinton/Huma, Rice and the whole damn gang....

5- The Regime was anxiously trying to arrange a swap of the one eyed
Sheik for an American Ambassador.

6- Hack a server and invite yourself to a preplanned Party, and
as a result, sadly we lost four good Americans.

7- Does anyone in the CIA remember the quotes "Don't shoot",
"Dr. Morsi sent us"... As Sgt. Schultz would say extreeeeeLy
disgusting...