FRANCE: Jihad in the Ranks of the Gendarmerie and the Army

Many thanks to JLH for translating this report from Junge Freiheit. The translator includes this note:

I can’t help wondering what the Foreign Legion must be like now.

France’s Police Have a Problem With Radical Muslims 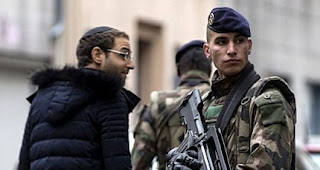 Security forces in front of a synagogue

PARIS: The French police have a problem with Islamists in their ranks. In a confidential document from the Ministry of Public Security (Prefecture of Police) obtained by the newspaper Le Parisien, there is discussion of 17 cases of radicalization between 2012 and 2015.

According to the document, officers on patrol heard widespread Muslim chanting. Also emphasized was the refusal to participate in a moment of silence for victims of terrorism. Furthermore, Muslim police officers are said to have refused to guard synagogues.

In one instance, police became aware of a policewoman who called on Facebook for terrorism and then characterized her police uniform as “filthy rags of the republic” as she wiped her hands on it. Next, she returned from the toilet with a headscarf and justified her actions by noting that exhibitionism is forbidden.

Even though the number of such instances is small, they are of great concern to security forces, according to Le Parisien. Therefore, the police administration has decided to collect instances of offenses against secularism in a weekly paper.

Cases documented in the paper concern above all practice of the Muslim faith in regard to daily prayers and clothing. Most instances involve young officers who are in the lower ranks.

The Military Also Has Problems With Radicals

According to reports in the media, the French military also has a problem with the radicalization of Muslim soldiers. As early as 2013, Colonel Pascal Rolez assistant to the vice director of counterespionage in the Direction de la Protection et de la Sécurité de la Défense (DPSD), warned: “We are seeing a growing radicalization among French soldiers, especially since the Merah Affair.” (In March 2012, Mohammed Merah murdered four Jews in a school in Toulouse and three French soldiers.)

After the attacks on Charlie Hebdo, the radio station RFI reported the desertion of about a dozen French soldiers, who joined the jihadists in Syria and Iraq. At the same time, the police noticed a 35-year-old female non-commissioned officer of the Gendarmerie, who had converted to Islam in 2011 and had maintained a connection to Amar Ramadani.

Ramadani was one of the accomplices of Amedyn Coulibaly, who had carried out an Islamist terrorist attack on a kosher supermarket at the beginning of January 2015. The policewoman had logged into the national data bank of suspicious persons 60 times, and was sentenced to a year in prison (probation) for offenses against security regulations, and released from the service.

After the terrorist attack on Charlie Hebdo, the French military dedicated 10,000 armed soldiers to the protection of synagogues, Jewish schools and important traffic hubs, as well as mosques. According to the daily Le Figaro, it is no longer simply the support of the police, but a permanent military presence.

The continent of Europe is in massive trouble, I don't care what anyone else says. They need to take measures NOW to stop the massive wave of Muslim immigrants and get rid of those that have at this time. It sounds rude and cruel, but the writing is on the wall, trouble is coming. The US isn't any better, our southern border is porous, ISIS sleeper cells are here as well. God help us...

Europe is already lost. Less than 10% attend church services.
The Catholic Church is dead in Europe, no matter how much the Media loves Pope Francis.
This cannot be stopped.

I've been warning for the past 10+ years that France will become the first European country whose military nuclear arms will be in the hands of moslims.

Good fucking luck to the rest of us when that happens.

We all know exactly what needs to be done-blood, a river of blood now or an ocean later.
MM

Meanwhile the madness of imposed suicide continues by the EU
Europe must accept Diversity or face War! Timmerman in EU Parliament
https://youtu.be/ybjVxMxP_FQ

What Every American (and European) Needs to Know About the Qur’an: A History of Islam and the United States https://youtu.be/QGfN_WEKh-I

The French have no choice, remove the muslims, which are just satanists anyway, or get the same history repeat of the MOORs, those evil people that caused havoc in France and europe for so many years. One must come to grips that Mohammad was a satanists, this has been proven to many times and by 6 sources. Obama and valerie jarrett are satanists within the USA and they are running the muslim ' satan war from the white house. Of this there is no doubt.

Moslems should NEVER be in your security forces or military EVER! You will be destroyed from within and from the very top.

Real Frenchmen must rebel in force and REFUSE to work with them or you will be shot in the back and the most critical time.

Luckily I live next door to France here in good old UK.

You have no idea what is actually happening in Europe. You base all you opinions on those who have an agenda and you foolishly follow it! There are no "no go areas" for Police in Uk. Yet I still hear that mentioned by your right wing masters.

Europe is lost cuz only 10% go to Church. Yes cuz the vast majority of our bigoted nasty religious zealots buggered off and founded you lot!!!

Just remember Islam and Christianity believe in the same god!!!

When people talk about Jihad they obviously believe it is an asymmetric war. Once war is engaged in both sides fight or one gets slaughtered. As painful as it may seem those that have declared Jihad on others need to learn how horrible war is.