RAY MABUS AND BARACK OBAMA: Gutting the U.S. Military From Within

President Obama came into office in 2009 promising "transformation" and he has delivered on that promise. Over the past 7 1/2 years we've witnessed billion dollar deficits and the establishment of a highly politicized and inexorably failing health care system ("Obamacare"); the "weaponization" of government agencies (think, IRS, EPA, DOJ) to intimidate and attack his political opponents; the calculated and feckless decline of American power and influence throughout the world; relentless redistributionist policies; and the president's support (often with a wink and a nod) of thuggish (and sometimes violent) radical groups like "Occupy Wall Street" and "Black Lives Matter." As a result, America is "on edge" -- socially, racially, economically -- as it hasn't been for decades. Indeed, many have reached the sobering insight that America's best days may now be behind her.

Overlooked by most in Obama's relentless efforts to "remake" America has been his ongoing and dangerous transformation of our military. Here I am not going address the dozens of weapon systems cut, or the tens of thousands of troops given their "pink slips." What I want to speak to is his administration's systematic destruction of the 200+ year-old culture of the U.S. military. This "multicultural makeover," happening right before our eyes, threatens to undermine the very fabric of our armed forces. The forced acceptance of open homosexuality and the burgeoning hostility toward Christianity; the gratuitous degradation of our troops (e.g., forcing ROTC cadets to march in red high heels to experience what it's like to be a woman; making male soldiers wear simulated lactation devices, or lecturing them on "white privilege," dare I go on?); the "full-court press" to make our forces more diverse, most alarmingly by opening up combat positions (even special forces) to female soldiers; and the relentless purging from the ranks of dozens of fine general officers whose only "offense" was their failure to "get with the program" -- all of this, like some nightmarish "progressive" Blitzkrieg, is now wreaking havoc with our reluctant service members, the objective being that of a complete and irreversible cultural transformation. What's next, I wonder -- weaponized hair and nail salons on wheels? 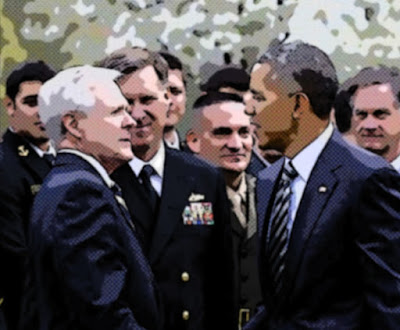 One of those leading the charge in the radical mutation of our military culture is Secretary of the Navy, Ray Mabus. The former Democratic governor of Mississippi has enthusiastically spearheaded our president's plan to weaken -- and, ultimately, tear asunder -- the bonds of brotherhood that have served our nation so well from Valley Forge to Iwo Jima and Fallujah. To the Bolsheviks now running the show in Washington, D.C., the U.S. military signified the final frontier -- the last bastion of (white, heterosexual) alpha male institutional domination that they still needed to extirpate "root and branch" to complete their bewilderingly successful 40-50 year march through our cultural institutions. And Ray Mabus is the president's point man. Or so it seems. His most damaging contribution to the deep and disturbing social changes rocking our military has been his full-throated support for the integration of women into all -- and I mean all -- combat positions in the U.S. Marine Corps. Infantry, armor, artillery, recon, special forces -- women are now to serve in all these combat branches and not simply in token numbers. This despite the fact that, according to surveys of military women, over 90% have absolutely no desire to serve in combat positions. Yet this is of no consequence to the small cabal of radical feminists and their enablers -- they are in control and they will do just what they want to do, for whatever nefarious purpose. In all honesty, do you think that Ray Mabus and his ilk believe a 5'4" female, weighing 110 pounds, will be able to meet the highly rigorous requirements of combat that today is the sole domain of much larger, much stronger men? Has anyone even considered the hygienic effects of having women serve in the field for weeks on end? And if anyone wants to further explore the history of mixed-gender combat units, simply look at the Israeli example. A catastrophe it was.

When the Marine Corps leadership produced a study making unequivocally clear that all-male units performed significantly better than mixed-gender units, Mabus would have none of it. He "savaged officials who ran the study, accusing them of bias and not wanting women to succeed." (Source: Jonah Bennett, "Navy Secretary Ray Mabus to Step Down," 3 March 2016.)

A paragon of political correctness -- that evil, sinister twin of Marxist multiculturalism -- Mabus is also supported the elimination of that loathsome word "man" from all job titles in the U.S. Navy. There are 21 job titles in the Navy which include the word "man" (e.g., "fireman"), and Navy officials were to report to Mabus by 1 April on what was to be done to efface such "sexist" titles from the vernacular of the Navy. Wonder how that went.

Navy recruiters will now be forced to push diversity at all costs -- women and minorities are in, white males are out, regardless of the impact such a policy may have on morale and mission effectiveness. Yet the impact on morale, on fighting qualities, is of little concern to Mabus and his merry band of Bolsheviks, as they turn our armed forces into a lunatic laboratory for the New Marxism -- an experiment which may well wreck the Marine Corps (and other service branches) as currently configured, as the final white alpha-male bastion in American society is expunged once and for all. And all in the name of "diversity" -- diversity ueber alles.

Not too very long ago, the thought of handing machine guns or grenades to young women and telling them to fight for us would have been met with derision -- horror even; indeed, no sentient human being would have entertained such a barbaric thought. Would America have been a greater, a more just nation had several hundred young women -- some no doubt pregnant -- been among the 1500 American G.I.'s who died on Omaha Beach on 6 June 1944? And, today, any female Marines captured by Islamic State would be systematically tortured, raped and killed; that would be the inevitable result of the gender policies promoted by preternatural fools such as Ray Mabus.

In a larger sense, the cultural evisceration of our military on the altar of multiculturalism, diversity, whatever you want to call it, should surprise no one. At its very core, multiculturalism seeks to destroy -- to crush all that is Good, Decent, Moral and Just in our fading Judeo-Christian society. As I said, this sinister process has been underway for decades, yet only now, under Barack Obama, have the Bolsheviks been let loose on our armed forces. Sadly, our military brass have, for the most part, simply stood by and watched as Mabus and his ilk wielded their wrecking balls. I cannot recall the case of a single general who, in an act of moral courage, resigned from the service in protest. Yet there is a fundamental difference between physical and moral courage, is there not?

In recent days, Russian fighter-bombers have done barrel rolls within ca. 30 feet of our planes and ships inside international waters. Such reckless behavior (no doubt part of Putin's plan to ratchet up the level of intimidation) leaves little to no room for error and focuses one's mind on the possibility of a tragic international incident, even war. But as the Army chief-of-staff testified recently before the Senate Armed Services Committee, if it ever came to war with Putin's Russia, we'd most likely get the short end of the stick.

Such is the state of America's armed forces under Barack Obama and Ray Mabus.

The gutting of the military tradition of honor and alegience to the Constitution is exactly what Obama is seeking to destroy. It is being done under the guise of "inclusiveness" and "social justice" but it is to make the armed forces loyal to the Party, not the Constitution. It is tragic when a "leader" despises the country and people he ostensibly leads.

A Tribute to Prince from the cast of The Color Purple

commoncrs is Ray Mabus on drugs.

It is interesting to watch how the culture of dRATS propounds to its citizens 'don't defend yourself', but on a policy level they will indiscriminately bomb the crap out of people, kill the unborn, and make diversity a buzz saw of their rigid rightness. And the people who should be grounded give them a pass. Is it "a small world" or what?