As the federal government continues in its quest to restrict the rights of gun owners across the country, local law enforcement is stepping up their response.

For many, it is one of a line in the sand against a bevy of agencies based in Washington, and partnering state agencies, who have violated the constitution.

The still-growing Constitutional Sheriffs and Peace Officers Association (CSPOA), headed by former Sheriff Richard Mack, is standing up to these infringements, and saying no.

Of course, it has the attention of the indoctrinated Big Government folks, who are apt to see a group of law enforcement officials standing up for the rule of law as – what else, a potential threat. 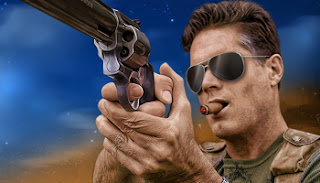 [A] group called the Constitutional Sheriffs and Peace Officers Association is intent on strictly enforcing their view of the U.S. Constitution … “its ambition is to encourage law enforcement officers to defy laws they decide themselves are illegal.” In essence, they are troubled by the overreach of the federal government in matters concerning guns, taxes and land management, and founder Richard Mack has described the federals as “the greatest threat we face today,” and his association as “the army to set our nation free.”

[…] At the association’s 2014 convention, dozens of sheriffs signed a declaration that they would not tolerate any federal agent who attempted to register firearms, arrest someone or seize property in their counties without their consent.

At a recent training for local police, the CPI reported, Mack declared that “gun control is against the law” and that his goal was to sign up about one-fourth of the nation’s sheriffs to join the association… find a true constitutional sheriff who’ll tell the federal government, ‘You’re not going to abuse citizens anymore.’”

Of course, it is his backbone and conviction that has the system worried – along with his ability to activate what is arguably the most powerful group in the nation at the ground level – the nation’s 3,000 or so sheriffs, who are elected and serve as the highest law enforcement official within the county unit.

Richard Mack, who successfully staved off federal encroachment at the Supreme Court level back in the 90s, described his CSPOA association as “the army to set our nation free.”

The media has been quick to demonize the fiery rhetoric for these constitutional-minded members of law enforcement. But the battle is grounded in sound ideology, and a principle that literally millions of Americans are prepared to fight for.

Last year, a police chief from a tiny East Texas town went on a rant warning President Obama that further attempts to impose gun control would “cause a revolution in this country.” It is entirely possible that this is no exaggeration or bravado:

“You are not our potentate, sir. You are our servant. And you were elected to serve and protect us first. And I suggest, sir, since you’re a constitutional expert, that you better review your history on the Constitution and understand that we are a free people. And we are subject to no one other than the almighty God and Jesus Christ the King. And as such, sir, I strongly encourage you to trust the law-abiding American citizen, because we won’t fail you and we won’t let you down. But if you try to disarm us, sir, then you will cause a revolution in this country to occur. So please revise your thinking, because we are not your enemy, the law-abiding gun owner in this country.”

Richard Mack’s case originated from his defiant stand when he was sheriff of Graham County in Arizona and an attempt was made to get local LEOs to perform background checks for the federal government under the Brady Bill. Supreme Court Justice Antonin Scalia led the decision upholding the stand for the 2nd Amendment under the 10th Amendment – marking one of the most constitutionally-sound decisions in recent history.

Mack struck a blow for states’ rights in the 1990s as a sheriff from Graham County, Arizona, when he and a sheriff from Montana challenged the Brady Bill’s interim requirement that local law enforcement agencies perform background checks on gun buyers. The Supreme Court ruled in Mack’s favor, with Justice Antonin Scalia writing the opinion affirming the states’ sovereignty under the 10th Amendment …

[…]Mack said “the government was forcing me to participate in a gun control scheme that I knew was unconstitutional. When all law enforcement is forced into that position by state or federal legislators, which one do we side with? And I believe there is a proper way to conduct oneself in knowing the difference between enforcing stupid laws and enforcing the principles of the Constitution.”

“[W]hen all the courts are against you, all the legislators are against you, where else do you go? I believe to the local county sheriff…and if that means standing against the federal government, then so damn be it.”

Well I don't believe this at all.
If the Deputies can raise money for the county by issuing tickets for those nasty guns, it will be full speed ahead.