Emptying out Guantanamo is a longtime goal of Obama. Shuttering the terrorist detention facility located on U.S.-held territory in Cuba has been a goal of President Obama, going back at least to the campaign trail in 2008. He wants to close the prison camp and unleash the worst of the worst among Islamic terrorists, allowing them to wreak havoc and kill more Americans. Violent Muslim militants are merely misunderstood people from a foreign culture, in Obama's view.

Obama doesn't give a farthing's cuss about the prospect of these hardened terrorists returning to the glories of jihad-fighting after leaving Gitmo. Terrorists, freedom fighters -- why quibble? They're all more or less the same to the president.

Why Senegal? Perhaps because about 95 percent of Senegal’s up to 14 million inhabitants are Muslims. 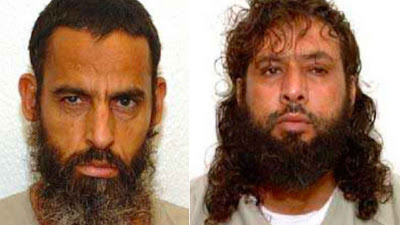 Although Senegal “has shown no signs of jihadist terrorism” and its government has cracked down on terrorist financing and money laundering in the region, it is bordered by Islamist violence-plagued Mali and Mauritania. According to the American Foreign Policy Council, there are concerns that Senegal “presents a potential ‘backdoor’ for radical, jihadist Islam, which already exhibits a major presence in rapidly-changing North Africa.”

According to a 2008 Department of Defense report, Ghereby was a member of the Libyan Islamic Fighting Group (LIFG) also known as Al-Jama’a al-Islamiyyah al-Muqatilah bi-Libya, which is reportedly tied to al-Qaeda.

Ghereby had been an “explosives trainer and a veteran jihad fighter” who participated in hostilities against U.S. and coalition forces in Osama bin Laden’s Tora Bora Mountain complex in eastern Afghanistan. He was deemed to be only a "medium threat from a detention perspective" and of "medium intelligence value," but was considered to be "high risk, as he is likely to pose a threat to the US, its interests, and allies[.]"

Like Ghereby, Bakr was deemed to present a "high risk" to U.S. interests but unlike Ghereby he was deemed "a high threat from a detention perspective" and is "of high intelligence value."

“If released without rehabilitation, close supervision, and means to successfully reintegrate into his society as a law abiding citizen, it is assessed detainee would immediately seek out prior associates and reengage in hostilities and extremist support activities," according to the DoD. Bakr mostly behaved himself in custody but he "has threatened to kill US personnel on several occasions.”

Bakr, who has "extensive explosives knowledge" according to the Pentagon, admits to being a member of LIFG and was identified as "commander of a militant training camp and acknowledged serving as trainer." He was also identified as an "arms dealer who provided support to [Osama bin Laden] in Sudan" and was determined to have been active in a cell that planned improvised explosive device (IED) attacks against U.S. and coalition forces.

Three months ago Obama released admitted al-Qaeda member and IED maker Tariq Mahmoud Ahmed Al Sawah, a Bosnian, who was shipped off to Bosnia. "These IEDs included the limpet mine to sink US naval vessels and the prototype for the shoe bomb used in a failed attack on a civilian transatlantic flight," the DoD reported.

Obama, who will return to private life in nine months blithely told Yahoo! News in December that "only a handful" of Gitmo detainees had returned to the battlefield. Actually, the number was 196 as of July 2015, according to the Office of the Director of National Intelligence (ODNI). The 196 figure represents 30 percent of the 653 detainees removed from Gitmo who were confirmed or suspected of returning to the battlefield.

President Obama continues to delude himself, claiming that Gitmo's continuing existence is the jihadist equivalent of waving a red cape at a bull.

"I am absolutely persuaded, as are my top intelligence and military advisers, that Guantanamo is used as a recruitment tool for organizations like ISIS, and if we want to fight 'em, then we can't give 'em these kinds of excuses."

But whose excuses is Obama talking about?

He is the one serially lying and making up excuses to justify releasing his jihadi soulmates. As the Weekly Standard notes, "Guantanamo rarely appears in jihadist propaganda, whether ISIS or al Qaeda, and reviews of recent propaganda materials from ISIS and al Qaeda – online videos and audio recordings, glossy magazines, etc. – found very few mentions of the facility."

None of this should shock Obama-watchers. He doesn't like letting facts get in the way of the radical left-wing narrative.

A friend with a son who's an MP in the Army stationed at Ft. Campbell in KY says they're preparing or the GITMO prisoners to be transferred there.