“Could California Become a Sanctuary State under Trump?” ran the January 26 headline in the Sacramento Bee. Readers can lose the question mark because governor Jerry Brown has been protecting violent criminals since the 1970s.

In 1973, American Indian Movement co-founder Dennis Banks was convicted of riot and assault for a 1973 courthouse gun battle in South Dakota. Banks had been having an affair with AIM activist Anna Aquash, who in 1976 was found murdered, shot through the back of the head. That year Banks fled to California, and Governor Jerry Brown refused to extradite him.

Banks took full advantage of Brown’s protection by studying at UC Davis, teaching at Stanford, and serving as chancellor of Deganawidah-Quetzalcoatl University (DQU), a ramshackle outfit near Sacramento. Banks fled when Brown left office but it wasn’t until the mid-1980s that the fugitive surrendered to authorities in South Dakota and served 18 months on the 1973 charges. 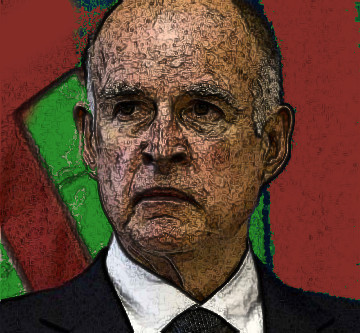 In 2011, Saul Isidro-Aucencio and Francisco Delgado, Mexican nationals in the United States illegally, gunned down Jamir Miller, 15, Richard Ward, 16, and Robert Corpos, 20, in Rancho Cordova, near Sacramento. Isidro-Aucencio used an AK-47 to shoot Miller in the head and Corpos in the back as he sought cover behind a tree. When Jamir Miller’s mother protested that the shooters were in the country illegally, judge Helene Gweon told her the case has “nothing to do with illegal aliens.” Jerry Brown, California Attorney General from 2007-2011, said nothing about the case.

Brown was California governor again in 2014 when Luis Enriquez Monroy Bracamontes, a Mexican national in the United States illegally after several deportations, gunned down Danny Oliver, 47, a Sacramento County Sheriff’s deputy. Bracamontes then shot Anthony Holmes, a motorist who refused to give up his car, and later the illegal killed police detective Michael Davis with an AR-15 and wounded Jeff Davis, a deputy. Bracamontes is on record that “I killed them cops,” and recently pleaded guilty while threatening to kill his attorneys.

Governor Jerry Brown ignored the case and devoted no attention to the victims’ families. The murders prompted no effort by California’s governor to prevent such violent criminals from entering the state. Likewise, the murders did not prompt Brown to question the practice of cities such as San Francisco from offering sanctuary to violent criminals in the country illegally.

Governor Brown and state Attorney General Kamala Harris, now a U.S. Senator, both backed up Mirkarimi’s decision to release Lopez-Sanchez. The murder of Kate Steinle prompted neither politician to challenge policies that give sanctuary to violent felons after multiple deportations.

In December, 2015, radical Islamic terrorists Syed Farook and Tashfeen Malik gunned down 14 people in San Bernardino, California. Brown delayed his trip to Paris by only one day, but did not seek “to minimize the significance of this terrorist attack.” He called it part of “a global phenomenon,” adding, “people who are committed to this jihadist doctrine are going to be killing people in very unexpected places.”

Brown said “we have to be on guard, and we have to do whatever we can do. And I’m going to be spending some time making sure that our federal-state collaboration really is working.” As the deadly terrorist attack confirmed, it is not working, and Brown did nothing to make it work.

Brown sees terrorism as a gun-control issue, and he expressed alarm at the gun laws of Nevada and Arizona, “a gigantic backdoor through which any terrorist can walk.” The governor expressed no concern that any terrorist could simply walk into the United States across the porous border with Mexico, and proposed no tightening of the border or changes to immigration laws.

Jerry Brown ran for president three times but did not mount a campaign in 2016. He backed Hillary Clinton and after her loss Brown posed as leader of the anti-Trump forces. Like many other California politicians, he cranked up the volume after President Trump’s limited executive order on travel. As it happened, California’s travel ban was already in force.

Last September, Brown signed a bill effectively barring state employees from traveling to North Carolina, with its dreaded bathroom bill, and other states with similar measures. The bill also restricts travel for University of California and Cal State University sports teams, and could also halt travel for conferences and training.

Governor Brown has signed bills giving imprisoned felons the right to vote, bills imposing draconian new restrictions on guns, and he backed a ballot measure reducing some felonies to misdemeanors. On the other hand, the governor has done nothing to challenge any sanctuary city, but he has provided a clue why he is the loudest voice in their defense.

California chose to use cheap Chinese steel on the new span of the Bay Bridge, $5 billion over budget, completed ten years late, and still riddled with cracked welds, corrosion and other problems. When apprised of the lingering safety issues, Brown famously said: “I mean, look, shit happens.”

Jerry Brown may be stridently sanctimonious but he doesn’t give a shit about the safety of Californians. That’s why he made California a sanctuary state. That’s why anybody strolling on Pier 14 in San Francisco can be shot dead by a violent felon who is not supposed to be in the country.