TWO CHARTS TO BLOW YOUR MIND: Where Illegal Aliens Live and How Many are Collecting Welfare

Try and contain your surprise, but it turns out that 20 metro areas are home to 60 percent of all illegal aliens in the U.S.

Examine the map, below, and you'll find that five of the top 20 illegal alien havens are in California.

Shut down California's financial incentives to harbor illegals and you solve a great percentage of the problem in the entire country.

Most of the United States’ 11.1 million unauthorized immigrants live in just 20 major metropolitan areas, with the largest populations in New York, Los Angeles and Houston, according to new Pew Research Center estimates based on government data... 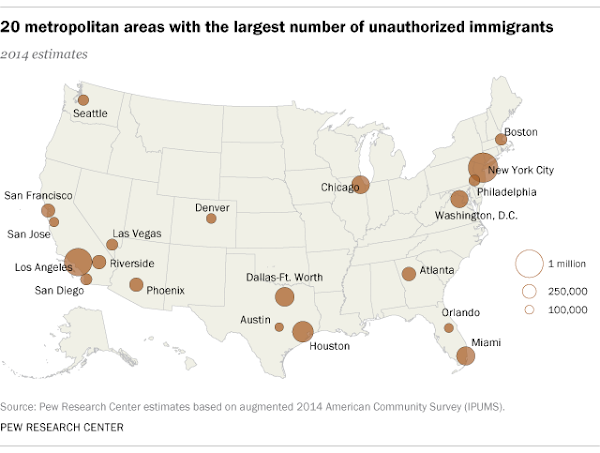 Harvard economist George Borjas offers us an historical perspective into our current immigration nightmare. In short, almost half of all non-citizens are on the public dole, something never before seen in American history.

Since 1903, the United States has allowed for the deportation of immigrants who became a public charge after they entered the country, and this is how the law now reads:

Any alien who, within five years after the date of entry, has become a public charge from causes not affirmatively shown to have arisen since entry is deportable.

Given these very straightforward–and very old–restrictions, it seems puzzling that we would find many immigrants on welfare... 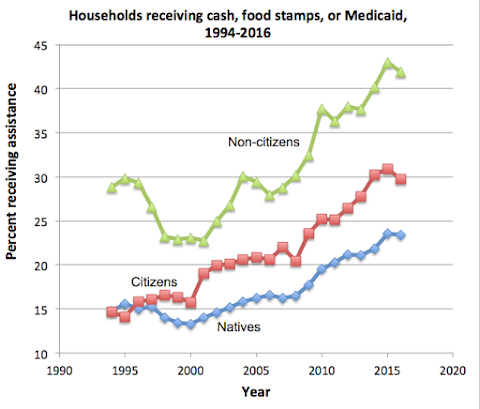 [But here's] the big elephant in the room. Immigrants who receive non-cash benefits–including the most expensive benefit of all, Medicaid–are not considered to be public charges. In the words of DHS: “Non-cash benefits (other than institutionalization for long-term care) are generally not taken into account for purposes of a public charge determination.”

If we began to actually enforce the law with a common-sense interpretation of the century-old statutes, the policy shift will affect an awful lot of people.

In other words, American citizens who paid into the system don't receive benefits like long-term medical care because -- in part -- we're all subsidizing aliens.

Seems fair. If you're a liberal.

What we need is a serious study documenting the public cost of illegals to our country. Add up the Welfare, Food Stamps, Medicare, Medicaid, illegal Social Security payments, Public Schools usage, cost of the legal system & incarceration, etc., and subtract whatever positive economic effect (if any) they may have on the economy. I suspect we'd be talking many hundreds of billions of dollars annually. If so, $20B to build a wall would be the best bargain we ever got.

Time to ENFORCE the laws on the books.
Appreciate your blog, Doug.

And President Trump recently said this is the non-negotiated price. He will cut out the special interest kick-backs and get an honest cost for the project.

I still remember some rough and tumble here, over various notions and Trump. I kept this blog on my list because Doug didn't go nevertrump, or even stick his foot in too deep or debate beyond reason. Glad, now, I stayed.

Anyway... Just kick them out, once the wall is up, though heading that way in the interum. They will, if they see a hammer coming, begin heading out on their own.

Might I suggest a simpler way? Send the next 10,000 Somali immigrants to Nancy Pelosi's district. Repeat next year. Burst the bubble the Lexus Liberals live in and see what happens.
The hilarty value will be extraordinary... Might even be some changes in attitudes.

I have said for years and still believe that the actual number of illegals in the US is between 3040 million. The 11-12 million number is a trope to diminish the extent of the problem. Illegals are, literally, everywhere you go in this country, from big cities to single-traffic light towns. We have to get serious about enforcing our borders.

Seems like the only "wall" that is needed is one between taxpayers wallets and sanctuary politicians and burrOcrats that prevents taxpayer money from being handed out to non-citizens...

It's likely if the gravy train of welfare bennies to non-citizens dried up, that many would return to their home country. Perhaps if they want to return, they might consider a normalized legal way to immigrate... This still shouldn't make them eligible for welfare...