NUKE THE FILIBUSTER: Democrats Started the Fight, It's Time to Finish It

Senator Harry Reid had big plans for the filibuster last year. The outgoing minority leader was bragging that the filibuster would be eliminated if Republicans tried to stop President Hillary Clinton’s judicial appointments.

"I have set the Senate so when I leave we’re going to be able to get judges done with a majority. It takes only a simple majority anymore," the top Democrat bragged. "They mess with the Supreme Court: it'll be changed just like that."

But instead of watching the maids hang up her pantsuits in the White House closets, Hillary Clinton is working on a collection of essays that she hopes someone will want to buy and Harry Reid is yelling at the children playing on his lawn. The Democrats don’t have the Senate or the White House.

And, as President Trump has urged, it’s time to nuke the filibuster. 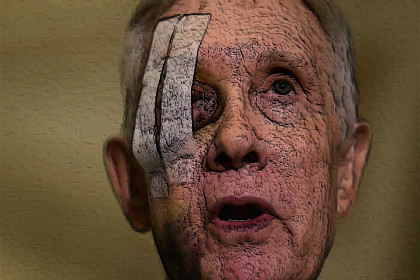 Despite its accidental origins, the filibuster was a good thing. But filibustering nominees is dead. Harry Reid made that clear. The only question is who will pull the trigger and be the first to benefit from it.

The Democrat candidates in the last four presidential elections all came out of the Senate. The leading 2020 candidates, Warren, Booker, Sanders and Gillibrand, are mostly sitting senators.  They are garnering attention and support with publicity stunts and obstructionism, like Booker’s “testimony” against Attorney General Sessions and Warren’s shrill meltdown at Logan Airport.

The lower tier, Merkley and Wyden, launch even more desperate publicity stunts. Merkeley will be filibustering President Trump’s nomination of Judge Neil Gorsuch to the Supreme Court. Wyden attempted to stop the process by refusing to show up entirely for committee hearings on two Trump nominees.

These antics are futile, but they make it very clear that Senate Democrats will do anything they can to undermine President Trump and pick up supporters and donors for their 2020 campaigns.

The recent history of the Supreme Court is littered with “moderate” nominations by Nixon, Reagan and Bush. Like the filibuster, this might be tenable if the Democrats reciprocated with moderate nominations. But instead the Democrats nominate leftists and Republicans nominate moderates who want to split the difference. The tide has been turning the other way. And now is no time to stop.

The Supreme Court is potentially the most powerful of the three branches of government. Supreme Court justices have the power to fundamentally transform the country in ways that few presidents, with the exceptions of FDR, LBJ and Obama in the last century, have been able to accomplish. The power to enforce or subvert the Constitution strikes at the very existence of the United States of America.

We cannot afford a “moderate” position on whether the Constitution should be upheld all the time, some of the time or only whenever it doesn’t interfere with a fashionable progressive agenda.

The fundamental conflict between originalism and activism presents stark choices. Either we have Constitutional rights or we only have those rights that any given judge feels we ought to on any given day.

A “moderate” position is just judicial whim that is a little less capriciously cruel. That is what we saw with Chief Justice John Roberts on ObamaCare. Roberts was more conservative than quite a few previous justices appointed by Republican presidents had been. But it still wasn’t enough.

And it isn’t only the Democrats who will abuse the filibuster to push for a “compromise” candidate.

The filibuster and its abuse by Democrats also provides cover for weak Senate Republicans to sink nominees they oppose without having to risk anything by actually coming out against them.

Democrats understand that. Behind the scenes, corrupt alliances to stop conservative agendas form. A shadow Republican opposition uses the Democratic opposition to explain to their constituents that they really wanted a more conservative outcome, but the mean Democrats wouldn’t let them.

Senate Minority Leader Schumer is either unwilling or unable to control his own people. The truth likely lies somewhere in between. Democrats would love to repeat the circus of the Nixon nominations. They have shown every inclination to drag out even the most minor hearings. And their radical base, which is busy screaming in airports, boycotting sub shops and assaulting Trump supporters, expects nothing less.

The Democrats have become a party of radicals. The ranks of Senate Democrats are full of men and women angling to win the favor of George Soros and the Sandernistas by shrieking the loudest. After the last round of defeats, obstructionism is all that their base wants and all that they can offer them.

By limiting the scope of their obstructionism, Republicans can allow Democrats to put on a show without truly impeding anything. And that way both sides get what they really want.

Republicans get their man or woman. And Democrats get to denounce Republican fascism.

There is no reason to leave the nuclear option in place except as leverage. But the leverage is mostly worthless. Both sides know that Democrats will eliminate it if the situation favors them. Both sides understand that it is highly probable that at some point Republicans will have to pull the trigger anyway.

And both sides understand that the road to 2020 for Senate Democrats lies through obstructionism.

Prolonging the drama doesn’t accomplish anything useful. All it does is provide cover for compromises that the country cannot afford. The filibuster is another victim of the radicalization of the Democrats. The sooner we realize that the Senate, like the rest of the country, can no longer function the way that it did before the left took over a national party, the more we will be able to do to save this country.

And we won’t save this country without a Supreme Court that puts the Constitution first.

Justice Kennedy talking about retiring. Clerks saying probably at the end of this term.

Hoping Trump nominates solid supporters of the Constitution to replace them all.

D's will scream about maintaining "balance", but have they EVER nominated a moderate to maintain balance? No. They go hard Left every time, and celebrate their "progress".

Fifty-one percent is still a tough hurdle to clear, considering that a couple of the Republican Senators might as well be Democrats.