How Hillary is Helping Pave the Way to Trump's Second Term

When all the campaign booze was downed and the last “I’m With Her” balloons were popped, bleary Democrat hacks rose from stained couches to try and explain the election to the rest of their party.

Two explanations made the rounds like the last champagne bottle for a victory that never came.

Hillary was a bad candidate. Her shady financial dealings made her untrustworthy. The more she tried to appeal to everyone, the less she appealed to anyone. She was better at hitting up big donors at glitzy parties than at interacting with working class voters. And the huge campaign machine they financed was no substitute for voter excitement.

Hillary was a historic candidate who would be sitting in the Oval Office right now if it hadn’t been for the FBI and the Russians. President Trump is illegitimate and must be impeached.  Hillary was not defeated by her flaws. Instead she was a wonderful leader who was stymied by a rigged election.

The first explanation was championed by the Sandernistas of the far left. Their case was straightforward. Hillary lost because she was a bad candidate. Bernie would have won. The Democrats needed to move forward by burying Hillary’s machine and replacing it with the even more radical Bernie left.

But the Clinton machine had no interest in being buried.

The Clintons are not just two greedy politicians. They’re a brand and an industry. The huge sums of money they raised went to subsidize a whole network of loyalists. And then there were the many friends who had gotten jobs based on the strength of their connections to Clintonworld.

It wasn’t just about the S.S. Hillary sinking into the cold waters of Chesapeake Bay. Hillary’s defeat endangered the positions of all her friends who had schemed, plotted and broken the rules to get her this far; the leaders of Democrat outfits in states across the country, bundlers who threw a lot of other people’s money into a giant hole and lobbyists who got by on the strength of their Clinton connections. 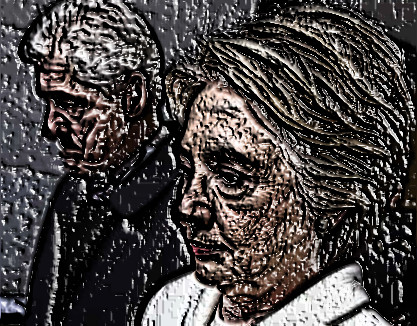 That $1.2 billion campaign cost was the tip of the iceberg. Billions had been plowed into Clintonworld.

They couldn’t and wouldn’t accept the blame for backing a bad candidate. So they lied. They insisted that she hadn’t lost. Hillary had been illegitimately denied the White House by a vast conspiracy.

A vast conspiracy involving the FBI, the Russians, the Electoral College and voter suppression.

The conspiracy has been examined and debated in detail. The motive for manufacturing this conspiracy has not. Its obvious goal is to delegitimize President Trump, but it also allows Hillary and her people to evade responsibility for their disastrous defeat. And that is why it really exists.

The Clintons have done enormous damage to their party. And they aren’t done wrecking it yet.

The conspiracy theory quickly became how Democrats explained Hillary’s defeat. And it was the radical left that was in the unusual position of having to argue against a conspiracy theory. Some on the radical left had their own ties to Russia. Others, like Michael Moore, who had predicted that the neglect of the working class would lead to Trump’s victory, saw the Democrats going down a dead end.

But the radical left had radicalized the Democrats. And radicals are suckers for conspiracy theories. Political extremism had pulled the party into paranoid fever swamps in which anything was possible. The media’s biased reporting and bad polls made Trump’s victory seem as if it should never have happened.

It was easy to go on listening to the same media outlets and believing that it really didn’t happen.

Denial took over. Time and money were wasted on insane and pointless recounts, harassment of Electors and finally attempts to block certification of the results. Democrats who believed that these were plans, instead of scams that had no chance of working, emerged from working frantically for the impossible even more convinced that Hillary had been robbed and the election had been rigged.

The left’s greatest weakness is an inability to accept responsibility and learn from its mistakes. Its economic, political and racial theories are already conspiracy theories that assign the blame for social injustice to millions of people based on their income or race. It demands absolute power for its leaders while refusing to admit that human beings are flawed and, regardless of ideology, will abuse power.

If its members could do that, they would be much more likely to become conservatives.

And so the real beneficiaries of this attack on our political system were the Clintons and their people.

Despite the outward show of bipartisanship, Bill Clinton has been pushing the conspiracy theory in private conversations. And Hillary and her people maintain a strategic ambiguity in all things.

Meanwhile David Brock, the most malicious figure in Clintonworld, has put together a blueprint calling for the impeachment of Trump. If Hillary were to make a very unlikely third try at the White House that would be about the only way to build a narrative in which she has anything resembling a chance.

The current Clinton objective is to assert control over the “autopsy” of their defeat. The Clintons are willing to let Obama have the activist clout of the OFA. They realize that their non-profit empire is on shaky ground. But they want to be able to write their own obituary. If they can do that, then they can set the terms for their political comeback and keep at least some of Clintonworld alive.

The Clintons may never run for public office again. But they know the value of shifting the blame.

When the Dems seized on a conspiracy theory to explain President Bush’s victory, they redeemed Gore. And Gore was able to make a comeback and amass a fortune of hundreds of millions of dollars. The Clintons are already very rich. But they could always be even richer. They need the Dems to see Hillary as a courageous candidate with an important message who, like Gore, was beaten in a rigged election.

Then the Clintons can move on to the next stage of their grifting enterprise.

Gore’s personal fortune came at a high cost to his party. Instead of understanding why Bush won, Dems descended into conspiracy theories about Florida and the Supreme Court. They dismissed President Bush as an idiot who couldn’t possibly have won on his own. And so they lost to him a second time.

If Democrats insist on believing that Trump only won because of FBI Director Comey and the Russians, they will be just as unready to face him in the next election as they were in this one.

And the real Hillary legacy may be that she will have handed Trump not just one election, but two.

-- The left’s greatest weakness is an inability to accept responsibility and learn from its mistakes. --

The entire Leftist program is a denial of individual responsibility and an assertion of group entitlements and responsibilities. "Identity politics" is nothing else; it cannot be. Hillary Clinton's refusal to accept her personal responsibility for her defeat is entirely consistent!