A hysterical, incompetent Democrat-media complex -- operating in lockstop, almost as if Journolist was still around -- immediate lept upon his statements. Glenn Kessler, the reliably Leftist Washinton Post columnist, used his debunked Polifact platform to rip Miller.

The problem for these big brains is that a 9-year old using Google could raise enough questions about systematic, rampant vote fraud to completely legitimize Miller. Here's a starter kit for the idiots reporters on the Left: 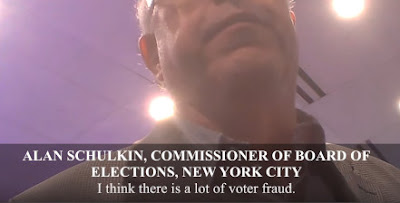 • On hidden camera, an authority on the subject -- Democrat election commissioner Alan Schulkin from New York City -- admitted that "there's a lot of voter fraud... they bus people around to vote"

• In the 2014 publication of Election Studies Journal, the authors estimate that 2.8 million illegal aliens voted in both the 2008 and 2010 elections

• In just three Virginia counties, more than 1,000 illegal voters are eligible to cast a ballot

• California's Los Angeles county reported the most provisional ballots -- the easiest to game -- in the country, representing a stunning 40 percent of all votes cast

• A retired ICE agent indicates that more than 10 percent of all illegals he arrested had illegal voter registrations.

So there's your starter kit, Glenn and company.

Get crackin'. Start reporting the truth.

Oh, wait: you're "liberals". You despise the truth. Sorry, my bad. Forgot I mentioned it.