THE 10 WORST CASES OF VERY #FAKENEWS: A lying press is the enemy of the people

As you all know by now, Trump has repeatedly accused the MSM of disseminating “fake news”, a charge that is thrown back at Trump by Leftist propaganda media outlets posing as news organizations.  For those of you who do not understand what "fake news" is, it is not just unsubstantiated or inaccurate stories that constitute fake news; it’s the biased (and very possibly coordinated) steady drum beat of characterizations, foundationless questions and the one sided selection of what is reported.  Following are some examples of MSM fake news.

1) The Russians “hacked the election”, giving the false impression that Russia was able to get into the voting machines, and designed to lead the viewer to believe that Donald Trump did not win the election fairly, legally or honestly.

2) Donald Trump is "anti-Semitic" simply because he didn't word things the way they wanted him to, and ignoring or failing to report Trump’s policy positions that constitute the most pro-Israel positions we have seen in decades, including discussions to move the U.S. Embassy to Jerusalem and the UN Ambassador’s position to ensure that Israel will be protected at the UN. (Contrast this to Obama’s positions, which pandered to anti-Semitic Islamists and allowed unilateral targeting of Israel for scorn, while turning a blind eye to Palestinian terrorism. Yet, “anti-Semitic” was never a charge leveled at Obama).

3) The Left and the MSM are holding Trump “accountable” for “hate crimes”, “racism” and “bigoted comments” that Trump never engaged in, encouraged, or supported.  To the contrary, there are people on the Left who committed violence at pro-Trump rallies sometimes posing as Trump supporters;  Soros-funded organizations financed anti-Trump rallies where actual violence did ensue, and Hillary supporters committed violence at Trump’s speeches in Trump’s name.  Many “hate crime” incidents were nothing more than conjured up stories designed to paint Trump as evil. The MSM reported all this as “news”, clearly never having checked the facts.

4) The MSM including CNN, the New York Times, the Guardian, and even the Wall Street Journal among others, falsely characterized Trump as "inviting Russia” to hack Hillary Clinton’s computer, “essentially urging a foreign adversary to conduct cyberespionage against a former Secretary of State.” This was a characterization that totally misinterpreted Trump’s words during the campaign when he pointed out that Russia was not “hacking the election”, and then he sarcastically added that if Russia was hacking the election, he hopes they can find Hillary's missing emails. 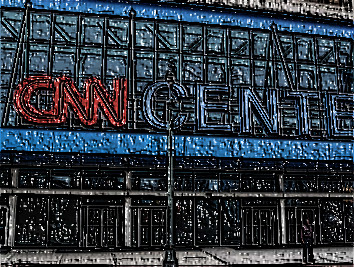 5) The MSM, across the board, labelled the President’s recent Executive Order as a "Muslim ban" despite the fact that it did not mention Muslims, did not include all or even most Muslim countries and was temporary.  This was clearly done to support the Left’s claims that Trump is “Islamophobic” and it ignored the fact that the Order was intended simply to pause immigration from "countries of concern," which were selected and designated as such by Obama, for long enough to give the Trump Administration a chance to come up with reasonable vetting procedures.

6) The MSM “reports” that the President is “unstable”, when in reality it’s nothing more than they don’t like his demeanor or don't agree with his policies.

7) My favorite is the most recent example: when Trump calls the media out on being fake news, it is characterized as “Trump opposes a free press” and is therefore “dangerous." Round the clock, the press is asking Trump’s aides if the President is going to take action to clamp down on the media or restrict First Amendment rights. Some in the media are making implied comparisons of Trump to tyrants in the Middle East who jail journalists.  But Trump never opposed a free press.  He opposes a lying press.  And he never threatened to make it illegal for the press to continue their lies.  He just let us know that he is going to counter them with facts.

8) Then there is the issue of selective reporting.  For example, as soon as Trump was elected, CNN had non-stop coverage of Obama's great "legacy" and all the "great accomplishments" he achieved, like the failing Obamacare, questionable climate change, and his biggest accomplishment of all -- being the first black president (emphasis on his race, obviously attributable to nothing he’s done).

9) Similarly, as soon as Melania Trump came to the fore, the newstands and stores flooded the stands with photos and stories of America's supposedly beautiful First Ladies, portraying photos of Michelle Obama and Jackie Kennedy on the covers, and glaringly omitting Melania Trump, who was to become the current First Lady mere days after the monthly magazines came out on the stands.

10) Worst of all, the Left makes accusations of fake news when the news is actually real, but they don’t like the facts or conversely, cites parody as real news. This (purposely) confuses the public and makes it harder to distinguish real news from fake news.  Yes, the Left is so full of it, that their claims of fake news are fake.

All of the above examples demonstrate tactics that the MSM uses to relay fake news, influence public opinion, and lead audiences to pre-determined conclusions.  Almost all the MSM news these days is fake.  And the President is right: it’s not just fake news; it’s “very fake news”.   But very fake news is not news at all.  It is commentary, opinion, stories, and sometimes outright fabrications presented as objective fact.

President Trump’s charge that “the press is the Enemy of the American people” is correct.  But it isn’t because “a free and independent press” is a threat.   It’s because the MSM, while free, is lacking the objectivity that used to constitute the hallmark of prestigious journalism.  The public relies on the media to provide them with unbiased information (to the extent possible), which in turn, will help shape their understanding of events at home and abroad.  Yet today, the constant one-sided, biased, and inaccurate reports flowing out of many “news” outlets more closely resemble propaganda, disinformation, or even influence operations, than they do news.

Information is power.  Disinformation hurts the public that the media purports to serve.  Yet, at this point, it seems safe to say that you are less informed if rely on the MSM for your information rather than more informed.  My advice? Turn off the MSM and find other sources.  President Trump is right: the lying press is dangerous.

The Obama administration's "Hands up, Don't shoot" LIE was #FakeNews at its worst -- ask the NYPD.
https://plus.google.com/+joekiddone/posts/Jpyho9KXVbY