A SIMPLE PLAN: How President Trump Can Bypass a Rogue and Lawless 9th Circuit Court

President Trump needs to deny the Left a victory over his immigration executive order. The court challenge now being heard by the infamously unconstitutional and extremist 9th Circuit threatens to set a precedent that will codify open borders and leave the president powerless to protect us. Trump can snatch victory from the jaws of defeat and deny the Left their unconscionable and unconstitutional attempted power grab by rescinding this EO and issuing stronger multiple replacements as stand alone orders.

The president cannot lose here. We must protect our borders; keep out the terrorists and rein in out-of-control immigration. It is the signal issue that got him elected. It is also the signal action needed to save this country from the Left’s malevolent intentions. The Left is attempting to subvert our country by simply replacing its population with a more malleable, sympathetic one. Unlike the immigrants of yesteryear, today’s are largely illiterate, welfare-dependent, unwilling to learn our language and definitely hostile to American culture and traditions. And while they are in many cases fleeing conditions created by their countries’ socialist policies, they nonetheless bring socialist ideas with them. As our country has become more “multi-cultural”, it has drifted ever leftward. 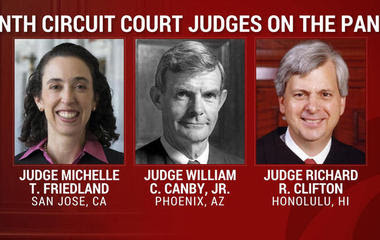 This was no mistake.

President Trump can and must rescind this executive order. Despite it’s hesitation, the 9th Circuit is virtually guaranteed to agree with the ruling by District Judge Robert Chambers halting Trump’s immigration ban. As the initial complaint was not justified by immigration law, which provides the president clear authority to do what he did, it would set a horrible precedent in eroding the president’s ability to protect the nation. If it goes to the Supreme Court, it will likely lose. Justice Kennedy will side with the leftists. With an 8 person court, even a 4-4 decision would mean the 9th Circuit ruling holds. Even with Trump’s Supreme Court nominee, Neil Gorsuch, a likely Kennedy defection would mean 5-4 for the Left. And support for Trump’s position is not even certain with Gorsuch.

Rescinding the EO would be a victory, not a defeat. First, it would prevent the Left from getting a major win in court that would alter permanently a president’s ability to control our borders. The lawsuit and likely favorable court ruling defy immigration law. They should not be allowed to get away with it. As abominable as it is, the current state of enforcement is better than what would result. The Left would like to thwart Trump’s agenda with endless lawsuits. Their victory here will encourage much more of the same.

But more importantly, Trump should reissue a score of executive orders that address the same issues as the current one, but make them even more muscular. If the Left is going to play dirty like this, make them pay for it. Give them something they will dislike even more and force them to fight many battles instead of just one. Perhaps that will cool their ardor for obstructionist lawsuits and nationwide, Democrat funded violence that threatens to drag this country into civil war:

Trump needs to rescind this executive order to snatch victory out of the Left’s intolerable hands. He needs to replace it with others that will punish the Left for their vicious, relentless, unconstitutional and often illegal tactics, and force them to fight every single item, piece by piece.

Or - just shut the whole damn thing off (nobody from nowhere) for four years. Not like there isn't precedent for that...

If the biometric system is for immigrants from terror sponsoring states,fine.If it's for American citizens,absolutely not.I've gone my whole life without being fingerprinted or biometrically identified by any government agency.I'm not interested in giving up that level of privacy.I don't go willingly where I have to go through metal detectors or get patted down.I've done nothing wrong and won't be treated as if I have.

I take it you don't have a CCP.

Anonymous said...
This comment has been removed by the author.
6:31 AM

just shut the whole damn thing off (nobody from nowhere) for four years.