YOUR LYIN' MEDIA: Kellyanne Conway in the Oval Office vs. Clinton donors trashing the Lincoln Bedroom

At an event celebrating historically Black colleges and universities that President Trump convened in the Oval Office, Senior White House Adviser Kellyanne Conway attempted to get a good angle for a photograph. 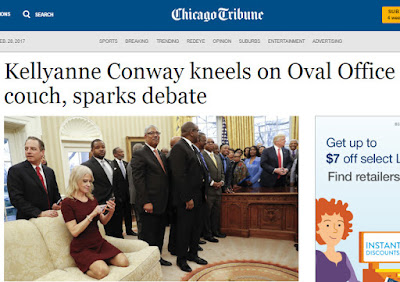 In doing so, she placed her feet on a couch.

Your very fake media erupted with fevered outrage, as Google News linked dozens of articles on the topic.

Headlines included the phrases "Show some class", "People are freaking out over a photo of Kellyanne Conway in the Oval Office", "Conway sparks media storm from Oval Office sofa", and "Conway's bizarre pose on Oval Office couch sparks wave of memes".

Not so surprisingly, the media had little to offer the world when the Clinton money laundering donation machine treated the Lincoln Bedroom like a Newark flophouse.

The White House Lincoln Bedroom is a national treasure. In it, President Abraham Lincoln held cabinet meetings, planned campaigns with his generals, and signed the Emancipation Proclamation. Lincoln's handwritten copy of the Gettysburg Address is permanently stored in the Bedroom.

Over the course of Bill Clinton's administration, the Lincoln Bedroom was rented to 831 different people. That total does not include the Clintons' relatives or their guests (of which there were 35); nor does it include daughter Chelsea's guests (72).

Not only did Bill Clinton's heaviest donors rent the room, but CNN reported a little remembered controversy in September 2000: that Hillary Rodham Clinton was rewarding donors to her Senate campaign with stays in the Bedroom. While the Clintons insisted that there was no connection between Senate campaign donations and guest stays, they also could not dispute that about a quarter of those staying had contributed to Hillary's Senate coffers. 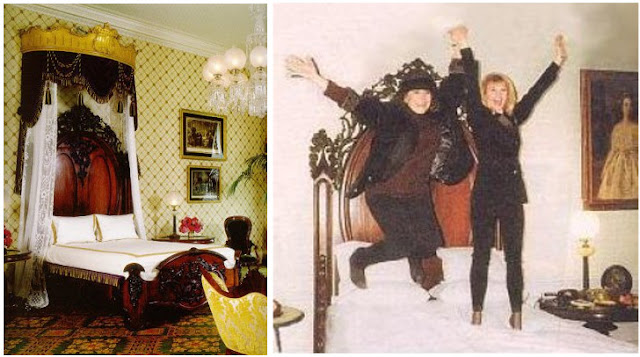 Two of the Lincoln Bedroom's renters -- Linda Thomason and actress Markie Post -- are pictured here trashing the bed by treating it like a trampoline.

Curiously, our very fake media betters never bothered engaging in hysterics when Democrats were in the White House.