DEBATING CONAN: Ted Cruz Drives Bernie Sanders Before Him and Hears the Lamentation of His Women

It was kinda like William Tecumseh Sherman versus Pajama Boy.

Consider this snippet, courtesy of PJmedia:

When Sanders asked Cruz point-blank whether "every American [is] entitled to healthcare as a right," Cruz took him back to the Constitution and the Declaration of Independence.


"Those are rights, you know what the Declaration of Independence said, 'We hold these truths to be self-evident, that all men are created equal and that they are endowed by their Creator with certain inalienable rights, that among these are life, liberty, and the pursuit of happiness,'" Cruz concluded. 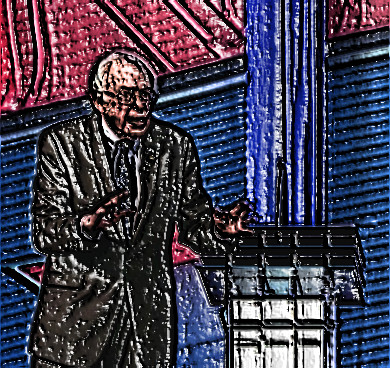 With this definition of rights settled, Cruz attempted to extend this notion of rights to healthcare. "So what is a right is access to healthcare," the Texas senator said. "What is a right is choosing your own doctor, and if you believe healthcare is a right, why on earth did you help write Obamacare, that cost six million people to have their insurance cancelled and had them lose their doctors, and had people like LaRonda who can't get health insurance, can't afford premiums, you're denying her what you say is her right."

This access to healthcare, at the cost which the market provides, is a negative right — something the government does not give but is required not to take away.

Sanders shifted the ground, and set himself up for a fall. Responding to Cruz's argument that Americans have a right to access, the Vermont senator declared, "Access doesn't mean a damn thing. What it means is whether people can afford it, can get the healthcare that they need."

This is why Sanders supports "Medicare for all," or a single-payer socialized medicine plan. But this plan falls apart due to basic economics, as Cruz pointed out.

"Bernie has talked about providing healthcare for free from the government," Cruz said. "You know what? The simplest principle in economics it TANSTAAFL, 'There ain't no such thing as a free lunch.' The liberal-leaning Urban Institute scored Bernie's health plan, concluded it would cost $2.5 trillion in the first year, $32 trillion over ten years."

The Texas senator tried to put that cost in perspective. "All of the federal income taxes we pay today are about $1.5 trillion a year," he argued. "$2.5 trillion means every one of us paying income taxes would have to triple what you pay in income taxes, to get an additional $2.5 trillion."

Cruz anticipated Sanders' upcoming retort. "Now, Bernie no doubt is going to come back and say, 'No, no no! None of you are going to pay, just the rich,'" the Texan predicted. But that wouldn't solve the economic problem.

"Well, how abut if we took every person that makes over a million dollars a year, and confiscated 100 percent of their income, take every penny that they make?" Cruz asked. "That would only raise enough money to fund Bernie's plan for five months."

"Here's another idea: how about if the government confiscated the assets of Apple, Google, Microsoft, Facebook, and Exxon-Mobil? If it came in, illegally seized these companies and sold them, that would pay for 1 year of Bernie's plan," the Texan declared.

As they say on the real blogs, read the whole thing. You'll love Cruz's closing statement, a denouement referring to -- what else? -- an all-time favoriate SNL line.

There is no talking sense to people anymore.

Just too many cooks in the kitchen. The people are left to turn up the heat, one way or the other. Nothing but despair these days.