It looks like the leaks continue to arrive, although -- thus far -- they're backdated to the days of the lame-duck losers known as the Obama administration.

Thought experiment: imagine the press outcry had the same kind of leaks, from an outgoing Bush 43 administration, attempted to disrupt an incoming Obama presidency in 2009.

"Nearly a month before Donald Trump was sworn in as president, Michael Flynn, his national security advisor designate, and other members of the president's transition team launched a vigorous diplomatic bid to head off a U.N. Security Council vote condemning Israeli settlements...

In Washington, Trump aides pressed allies, including Egypt and Britain, who both played critical roles in helping the Palestinians draft the measure, to oppose the resolution. 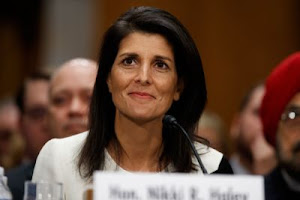 'We were all under pressure' from either Israel or the Trump administration, said one Security Council diplomat.

Nikki Haley, the president's pick to serve as U.N. envoy, sought frantically to reach Samantha Power, then still serving as U.S. ambassador to the United Nations, calling her office and cell phone number, a U.S. official told Foreign Policy. Power's advisors suspected Haley would try persuade Power to veto the resolution, and she did not take the call.

In New York, Flynn himself placed calls to foreign ambassadors on the U.N. Security Council, including those from Uruguay and Malaysia, the latter one of four countries that put the resolution to a vote.

Flynn offered pleasantries to a senior Uruguayan official who took the call, before politely urging the government to vote against the resolution, or to at least abstain, according to a council diplomat familiar with the exchange. Flynn explained that the Trump administration would pursue a different approach to addressing the Middle East conflict once it took office, and that it was not the right moment to adopt the resolution..."

I posed a question to the article's author. And I won't hold my breath waiting for a response.

Question for @columlynch: care to disclose the nature of the sources that leaked COMINT wiretaps to you? https://t.co/TRMZxbMePf #FakeNews

As I said earlier: box 'em all.