This should make a few illegal alien supporters' heads explode. Starting with the editorial board of the New York Times, which has gone all in on supporting the unlawfully present:

About 11 million people are living in this country outside the law. Suddenly, by presidential decree, all are deportation priorities, all are supposed criminals, all are threatened with broken lives, along with members of their families. The end could come for them any time.

Why yes, yes it could (you should read the editorial. Quite frankly, it deserves it’s own post, but, every paragraph is beyond moonbat). 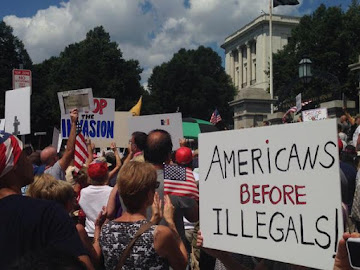 In a pair of memos, Kelly offered more detail on plans for the agency to hire thousands of additional enforcement agents, expand the pool of immigrants who are prioritized for removal, speed up deportation hearings and enlist local law enforcement to help make arrests.

The new directives would supersede nearly all of those issued under previous administrations, Kelly said, including measures from President Barack Obama aimed at focusing deportations exclusively on hardened criminals and those with terrorist ties.

The NYTEB said it: they are living in this country outside the law. If they crossed the borders without permission or overstayed their visa, then they are unlawfully present. They also complained about creating an atmosphere of fear. Good. Criminals should be worried.

Illegals have no one to blame but themselves. This is not on the citizens of the U.S. We didn’t make them come here illegally/overstay visas. They CHOSE to do that. They chose that for their children, in many cases. They do not help their case when they demand, DEMAND, that the United States give them money, services, welfare, healthcare, housing, food, education, the right to vote, and citizenship. They aren’t asking. They’re demanding. They’re out in the streets insulting citizens, they freak out over citizens flying the flag of the U.S., they fly the flags of Mexico and other nations, and they demand the return of the American southwest to Mexico. Being humble would help their case: they are anything but.

Another new provision would be to immediately return Mexican immigrants who are apprehended at the border back home pending the outcomes of their deportation hearings, rather than house them on U.S. property, an effort that would save detention space and other resources.

The guidelines also aim to deter the arrival of a growing wave of 155,000 unaccompanied minors who have come from Mexico and Central America over the past three years. Under the new policies, their parents in the United States could be prosecuted if they are found to have paid smugglers to bring the children across the border.

“This memo is just breathtaking, the way they really are looking at every part of the entire system,” said Marielena Hincapié, executive director of the National Immigration Law Center.

Obviously, she isn’t thrilled with this state of affairs. It is breathtaking that a presidential administration is finally looking to crackdown on illegal immigration. If you want to stem the flow, you have to create that fear that they won’t be caught and let go with promise to come back for a hearing, for which the illegal rarely shows up to. You get caught, you go bye bye. Too often, over the years since Reagan first tried an amnesty, thinking this would be the last, federal policies have emboldened illegals to journey to the U.S. Now? Deterrence.

Team Trump needs to start taking on those who have overstayed their visas, as well, along with looking at policies that penalize companies that employee illegals, among others. Create the atmosphere where illegals won’t come, they won’t overstay visas, no one will hire them. At that point, then we could perhaps look at a limited pathway to citizenship, or, at the least, permanent resident status.

Use and / or possession of a stolen SSN is a crime...

...violating the terms of your visa is a crime...

...ignoring the expiration date of your visa (and remaining within the USA) is a crime...

...all of which is lawful cause for deportation, visa holder or not.

Be still my beating heart