The Deep State's Coup Against Trump

The Central Intelligence Agency (CIA) has reportedly interfered in countless governments across the globe. Now, the agency has also begun an intelligence coup within its own government.

Last week, Trump’s national security adviser Michael Flynn was forced out of the Trump administration following leaks from the intelligence community that revealed he had misled the public and the administration on conversations he had with a Russian diplomat. Major news outlets, the Washington Post and the New York Times, both reported on the leaks.

While the mainstream media has blasted Trump and Flynn for these alleged ties to Russia, some of the more astute journalists out there have taken a different approach. Although he asserted the leaks were justified, prominent journalist Glenn Greenwald raised some very disturbing issues as to the possible motives behind the leaks:

“It’s very possible — I’d say likely — that the motive here was vindictive rather than noble,” Greenwald wrote. “Whatever else is true, this is a case where the intelligence community, through strategic (and illegal) leaks, destroyed one of its primary adversaries in the Trump White House.” 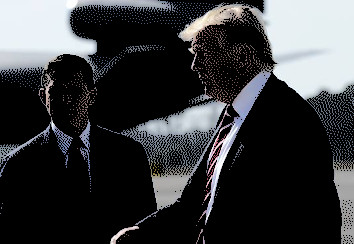 Throughout the presidential election, Trump’s campaign differed from the status quo approach of his opponent Hillary Clinton in that Trump was interested in restoring relations with Russia and focusing less on ousting the Syrian regime. As it transpires, the recent leaks demonstrate that Flynn may have been the Russian-American go-between, as well as been on the receiving end of a hand-delivered sealed proposal detailing a way for the Trump administration to lift sanctions against Russia. The plan also reportedly included a potential peace deal for Ukraine and Russia.

This is hardly the outrageous scandal the media has painted it to be considering the Obama administration was caught red-handed in much bloodier scandals, such as Operation Fast and Furious, in which the Bureau of Alcohol, Tobacco, Firearms and Explosives (ATF) smuggled assault rifles across the Mexican border that later turned up at a number of crime scenes.

Still, the leaks damaged Flynn’s reputation and forced his exit. In so doing, the intelligence community has sent a serious warning to the Trump administration: Do not attempt to restore relations with Russia.

The message has been heard loud and clear as Trump has reportedly selected General H.R. McMaster — a staunch cold warrior — to be his National Security Advisor. In a speech delivered at the Center for Strategic and International Studies last May, McMaster blamed the supposed lack of U.S. military presence overseas for what he referred to as a more aggressive Russian geostrategic posturing. He stated:

“Even though it may have been apparent, at least since 2008, that Russia was changing its geostrategic behavior and engaging in… probing at the far reaches of American power, our strategic response was to accelerate our withdrawal of…army forces from Europe. And what we’re seeing now is we’ve awakened to obviously this threat from Russia who is waging limited war for limited objectives. Annexing Crimea. Invading Ukraine. At zero cost. And consolidating gains over that territory, and portraying the reaction by us and partners as escalatory. […] What is required is forward deterrence. To be able to ratchet up the cost at the frontier.”

Senator John McCain, a fierce critic of Trump’s anti-status quo policies, praised McMaster’s appointment. McCain said McMaster “knows how to succeed. I give President Trump great credit for this decision, as well as his national security cabinet choices. I could not imagine a better, more capable national security team than the one we have right now.”

If you find yourself wondering how an appointee who wants to restore relations with a nuclear power like Russia is worse for America’s national security than an appointee who wants to aggressively oppose Russia, you are not alone. If global peace and security were at the forefront of McCain’s foreign policy ideas, surely having friendly relations with other countries would be the better option.

It is, therefore, quite telling that a member of Trump’s team could be ousted for having questionable relations with Russia, yet few members of the establishment would have batted an eyelid over Hillary Clinton’s ties to countries such as Saudi Arabia had she had taken office. Clearly, the CIA has no interest in restoring relations with Russia and will do anything in its power to put the Trump administration back on track with business as usual.

As Greenwald noted, those who celebrate blows to the Trump administration at any turn should still be cautious about the manner in which these recent developments unfolded:

“So, Trump’s agenda that he ran on was completely antithetical to what the CIA wanted,” Greenwald argued. “Clinton’s was exactly what the CIA wanted, and so they were behind her. And so, they’ve been trying to undermine Trump for many months throughout the election. And now that he won, they are not just undermining him with leaks, but actively subverting him.

As such, Russia is already beginning to fear Trump. Syria, Russia’s longtime Middle Eastern ally, looks to be besieged by foreign troops, and not just American ones. Ukraine is currently spiraling into an all-out war almost in secret, as the mainstream media has barely focused on it.

These wartime developments are not necessarily the work of a democratically elected government, but a shadowy cocktail hybrid of a number of different agencies who will oust anyone they view as a threat to their agenda.

Re: the Operation #FastAndFurious mention...
Some info on Obama's gun-running to narco-terrorists
https://www.facebook.com/notes/joe-kidd/some-information-and-links-on-the-obama-administrations-fast-and-furious-scandal/1037257352953486