When Chester Evans Finn, Jr., a former United States Assistant Secretary of Education, observed in 1989 that university campuses had become “islands of repression in a sea of freedom,” he was anticipating a troubling and prevalent trend now poisoning academia, namely, the suppression of free speech. With alarming regularity, speakers are shouted down, booed, jeered, and barraged with vitriol, all at the hands of groups who give lip service to the notion of academic free speech, and who demand it when their speech is at issue, but have no interest in listening to, or letting others listen to, ideas that contradict their own world view.

This is the tragic and inevitable result of a decades of grievance-based victimism by self-designated groups who frame their rights and demands on identity politics and who have been successful in weaponizing this victim status to stifle debate.  In the space of the past two months, for example, tendentious and morally self-righteous progressive students, and some faculty, have displayed a shocking disregard for the university’s cardinal virtue of free expression, deciding themselves who may say what about whom on their respective campuses—and purging from campuses those ideas they have deemed too hateful, too unsafe, too incendiary to tolerate or to allow to be heard. 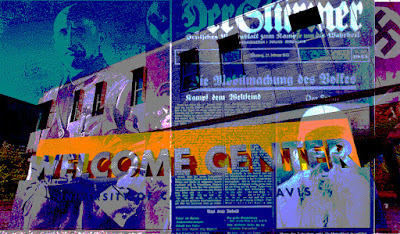 At Middlebury College, in one of the most astonishing examples, Charles Murray, political scientist, libertarian, and author of the controversial 1994 book, The Bell Curve: Intelligence and Class Structure in American Life, was verbally assaulted by a crazed audience of students intent on shutting down his planned speech—a crowd that eventually physically surrounded Murray and a Middlebury professor, Allison Stanger, and shoved them with sufficient force that she was hospitalized.  “Your message is hatred, we cannot tolerate it,” the intellectual thugs screamed out.

At NYU, Gavin McInnes, co-founder of Vice Media and the host of The Gavin McInnes Show on Compound Media, was showered with pepper spray by agitated and raucous protesters before his scheduled February 3rd speech.

Ezra Levant, conservative political activist, writer, and broadcaster, had to endure a similar experience at Canada’s Ryerson University in March when protesters set off alarms, pounded on doors, and continuously interrupted his speech while chanting, “no Islamophobia, no white supremacy.”

And at Berkeley on February 1st, some 1500 violent rioters, including members of the radical, far-Left Antifa group, feminists, gay activists, pro-immigration groups, and other faculty and students, lit fires, smashed windows, tossed smoke bombs, destroyed property, and pepper sprayed and beat pro-Trump bystanders and conservatives, all because of the purported extreme views of Milo Yiannopoulos, a speaker invited to campus by the Berkeley College Republicans that evening as part of his “The Dangerous Faggot Tour.”

Something is clearly amiss on North American campuses, and this recent spate of disrupted events has brought to the forefront a troubling phenomenon on campuses that supporters of Israel have been experiencing for more than a decade already. Anti-Israel campus activists have conducted an ongoing campaign to delegitimize and libel Israel, and their tactics include a concerted and blatant attempt to shut down dialogue and debate—anything that will help to “normalize” Zionism, permit pro-Israel views to be aired, or generate support for the Jewish state.

The marauding, virtue-signaling bullies who were successful in suppressing the speech of conservative speakers whose views they had predetermined could not even be uttered on campus share a common set of characteristics with the campus activists who have led the assault against Israel and Jewish students who support it: it is they, and they alone, who know what it acceptable speech, what ideas are appropriate and allowed, which groups are victims of oppression and should therefore receive special accommodation for their behavior and speech, which views are progressive (and therefore virtuous) and which views are regressive (and therefore hateful), which causes are worthy of support and which are, because of their perceived moral defects, worthy of opprobrium.

The notion that a vocal minority of self-important ideologues can determine what views may or may not be expressed on a particular campus is not only antithetical to the purpose of a university, but is vaguely fascistic by relinquishing power to a few to decide what can be said and what speech is allowed and what must be suppressed; it is what former Yale University president Bartlett Giamatti characterized as the “tyranny of group self-righteousness.”

The sententious activists fueling this ideological bullying may well feel that they have access to all the truth and facts, but even if this were true—which it demonstrably and regularly is not—it certainly does not empower them with the right to have the only voice and to disrupt, shout down, or totally eliminate competing opinions in political or academic debates. No one individual or group has the moral authority or intellectual might to decide what may and may not be discussed, and especially young, sanctimonious students—whose expertise and knowledge about the Middle East, in particular, is frequently characterized by distortions, lies, lack of context, corrosive bias against Israel, and errors in history and fact.

The frequency and intensity of the disruption of pro-Israel events is shocking. The AMCHA Initiative, an organization that tracks instances of campus anti-Israelism and anti-Semitism, reported that in February 2017 alone, pro-Palestinian radicals attempted to disrupt and shut down the following events: a University of Georgia Dawgs for Israel event called “Beyond the Headlines: Israeli Soldiers Tour,” during which members of the toxic Students for Justice in Palestine (SJP) tossed images of dead children around the room and then were escorted out of the room by an armed guard, chanting, “The occupation is terrorism” and “We will not allow justification of ethnic cleansing, occupation, and murder on UGA’s campus;” a University of Washington pro-Israel education display promoting peace that was set up by the Coalition of Husky Allies for Israel and was vigorously protested by Students United for Palestinian Equal Rights (SUPER-UW) who complained repeatedly that the pro-Israel display was “too close to SUPER-UW’s display,” and, more preposterously, that the pro-Israel display was offensive and “triggers” them; a Florida State University Hillel-sponsored event where Israeli soldiers spoke. SJP members disrupted the event, unfurling a large Palestinian flag, standing up during the presentation, and shrieking, “There are not many opportunities . . . to look my colonizers in the eyes with their hands bare of weaponry to tell them [that] what they are doing to Palestine and Palestinians is wrong . . . and so Palestine will never be taken away, it will never disappear and Palestinians all across the world are ready to return. They will return one day . . . Free, free Palestine;” and a Students Supporting Israel at Columbia University event with Danny Danon, Israel’s Permanent Representative to the United Nations. Protestors from the anti-Israel University Apartheid Divest chanted, “Stop your murder, stop your hate, Israel is an apartheid state!” and “No peace on stolen land! Justice is our demand!” and some protesters broke into the lecture hall, interrupting Danon seven times while screaming out such chants as, “From Palestine to Mexico, border walls have got to go,” and “From the river to the sea, Palestine will be free.”

College administrators regularly give lip service to the enshrined value of academic free speech and robust debate about controversial issues, and that is an admirable goal and an intellectual environment in which scholarship and learning can thrive. But university communities also thrive when they operate with civility and decorum, meaning that when it comes to academic free speech, students and faculty have the right to express their ideas, no matter how controversial and unpopular, but they must do so in a way that does not interfere with the normal operations of the university or the ability of professors to teach and students to learn.

This means that it was never the intended purpose of academic free speech to enable or permit students, for example, to scream out in protest in classrooms if they disagree with the instructor or merely wish to raise their displeasure with some issue, engage in speech and behavior that would normally be considered to be incitement or harassment or criminal, and, most relevant to this current issue, individuals cannot, under the protection of free speech, deprive another of his or her free speech rights—through disruptions, heckling, physical obstructions, or other tactics which have as their purpose to suppress and/or eliminate the speech of those with opposing views, including the threat of violence if certain controversial speakers are allowed air their views, the so-called “heckler’s veto.”

True intellectual diversity — the ideal that is often bandied about in academia but rarely achieved — must be dedicated to the protection of unfettered speech, representing opposing viewpoints, where the best ideas become clear through the utterance of weaker ones. “. . . The University’s fundamental commitment is to the principle that debate or deliberation may not be suppressed because the ideas put forth are thought by some or even by most members of the University community to be offensive, unwise, immoral, or wrong-headed,” a 2014 Report of the Committee on Freedom of Expression by the University of Chicago suggested. “It is for the individual members of the University community, not for the University as an institution, to make those judgments for themselves, and to act on those judgments not by seeking to suppress speech, but by openly and vigorously contesting the ideas that they oppose.”

The communist progressive movement here in America will sooner or later have to be dealt with in the only manner they recognize and respect. Bone crushing bloody violence.
They are a far far greater threat to freedom liberty and the traditional American way than all other worldly threats to it COMBINED.