What's that? You say they are unlawfully present in the United States?

Then I guess, by the letter of the law, that they are criminals!

Newsweak shrieks that President Trump's new immigration order "had led to the arrest of hundreds of undocoumented immigrants for minor [sic] crimes":

U.S. immigration officers arrested 367 undocumented immigrants in a country-wide blitz spanning several weeks in March and April. While many of those detained have criminal backgrounds, many are also not the “bad hombres” President Donald Trump said he was going to prioritize getting out of the country, raising concerns among civil rights groups who argue immigrants are being forced to live in fear. 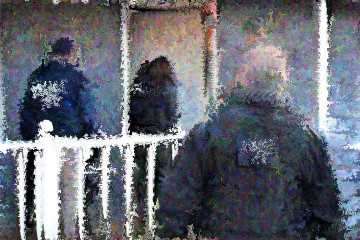 A series of press releases issued in the first week of April show the large-scale coordinated efforts by U.S. Immigration and Customs Enforcement to round up immigration offenders in Texas, Oklahoma, Colorado, New York and Washington, D.C. Yet of the 75 people arrested during a three-day raid in North Texas and Oklahoma in the first week of April, 23 did not have criminal pasts. Of the 31 arrested in New York the same week, the most dangerous offense committed by 12 of them was driving under the influence. And 16 of the 153 people arrested during a two-week operation in southern Texas had no criminal history.

Those who had committed offenses faced charges on everything from aggravated assault, burglary, drug trafficking, child abuse, human trafficking and sexual assault. But many others had been charged with fraud, driving under the influence or marijuana possession, in other words, not exactly the dangerous criminals Trump said he would go after.

Perhaps they aren’t the ones that Trump said he would go after, but, he’s not sitting their approving each and every illegal who ICE goes to detain. Furthermore, ICE typically picks up the low and no crime illegals because they have outstanding deportation orders already on the books. Double furthermore, this same thing happened under Obama. Because Obama was only going to micro-manage ICE operations so much.

Just because Trump said he would “prioritize” does not mean ICE won’t pick up those with other crimes or no crimes. And, really, is DUI not a serious crime? When you drive under the influence, usually alcohol, you are drastically increasing the danger to other people. Fraud usually involves stealing legal citizen’s information, which can ruin their lives. Oh, and none should be here in the first place.

But under the Trump administration, the priority has become all undocumented immigrants, no matter their criminal past. The Department of Homeland Security will no longer “exempt classes or categories of removable aliens from potential enforcement,” explained Secretary of Homeland Security John Kelly in a February 20 memo. Immigrants who had overstayed a visa were also a priority, he said.

What part of “unlawfully present” is not understood?

Following the raids in Washington, D.C., La ColectiVA, a local rights group, protested Monday in front of ICE headquarters in Virginia. “We are here to say that we are watching, we are vigilant and we will not let our community members live in fear of deportation and of being abducted and separated from their communities,” the group wrote in a Facebook post. They said families in the surrounding area were being “forced to live in fear” of being deported.

[Editor's Note: I've asked "progressives" for years to tell us which laws are okay to break and how they arrived at that list. I'm still waiting.]