AMAZING: Consumer Electronics From Half a Century Ago

So I was helping clean up the residence of an elderly relative and came across some fascinating examples of early consumer electronics.

Top: The Zenith Space Commander Three Hundred is reportedly the first-ever, wireless television remote control. It "used mechanical switches underneath its four buttons that sent out ultrasound in different frequencies... A receiver on the television used those frequences to change the channel and the volume." 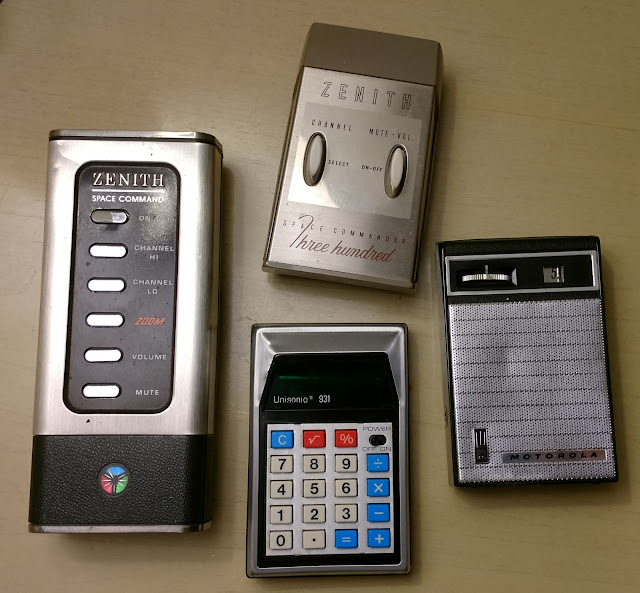 I'm guessing this is a late fifties or early sixties model, but perhaps one of our expert commenters might be able to identify it more precisely.

Bottom: The Unisonic 931 was first manufactured in 1975. it offered 8 digits of precision and basic algebraic logic functions.

Left: The Zenith Space Command 1000 remote with a fancy, red Zoom function. This was the most modern of this quartet, manufactured around 1975.

It's hard to believe how far we've come; nowadays, an enterprising 12 year-old can control every appliance in a home from an iPhone.

at 6:42 PM
Email ThisBlogThis!Share to TwitterShare to FacebookShare to Pinterest
Labels: Scitech