Repeal and Replace Our Universities


The political left has made a complete pig's breakfast of our educational system.

Political intolerance is now the official policy at colleges and universities across the United States with violence or the threat thereof as the means of enforcing extreme leftist orthodoxy.

In February, a proposed speech by former Breitbart editor Milo Yiannopoulos precipitated riots at the University of California Berkeley as protesters smashed ATMs and bank windows, looted a Starbucks, beat Trump supporters, pepper-sprayed innocent individuals, and set fires in the street. The speech was cancelled.

Conservative commentator Ann Coulter was forced to cancel her speech at Berkeley, after law enforcement sources announced that there was a "99% chance" of violence from left-wing activists if the speech was held. 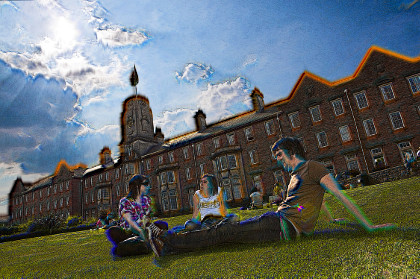 Eric Clanton, a faculty member at California's Diablo Valley College and alleged ANTIFA (self-proclaimed anti-fascist but in reality anti-First Amendment) activist, who spends "a lot of time thinking about REVOLUTION," is the prime suspect in bloody attacks, where a bicycle lock was used as a weapon to assault free speech campaigners and Trump supporters. Clanton's Diablo Valley College profile has now been scrubbed, but according to the WayBack Machine, he joined the faculty in 2015 and "His primary research interests are ethics and politics." Got that? He teaches ethics in politics.

Clanton's lead professor for his Master's degree thesis was Muhammad Azadpur, who has frequently lectured at the Iranian Institute of Philosophy in Tehran, is an advocate of Obama's Iranian nuclear deal, took part in a 2015 panel that justified the brutal Paris nightclub attacks and argued that Al Qaeda's terrorist attacks of September 11, 2001 did not take place due to Islam or Islamic radicalism, but it was "directly proportional to the level of tyrannical manipulations" of the United States.

Rather than training in preparation for success in life, the exorbitant costs of higher education are mainly devoted to leftist political indoctrination.

It should come as no surprise, then, that the percentage of young adults living with their parents has risen to 75-year high, likely because the economic usefulness of brainwashing by a gaggle of tenured radicals has reached an all-time low.

Academic political intolerance or Totalitarianism 101 is both deliberate and as old as the Russian Revolution.

It is based on an essay "Repressive Tolerance" written in 1965 by Herbert Marcuse, an adherent of the Soviet-controlled Frankfurt School, which was the cultural arm of the Communist International founded to undermine western Judeo-Christian democracy from within.

Fred Bauer, in his article "The Left and ‘Discriminating Tolerance,'" captures Marcuse's inverted logic and identifies the origin of the political intolerance presently practiced at U.S. academic institutions:

"Marcuse argued that, because of the radical repressiveness of Western society, a tolerance for all viewpoints actually contributed to social oppression. A pervasive network of assumptions and biases implicitly privileges the viewpoint of the powerful, so that seemingly ‘equal' presentations of opposite opinions actually end up benefiting the viewpoint of the powerful. He offered the example of a magazine running a piece criticizing the FBI along with one praising the FBI. Fair and balanced? Not so fast, Marcuse said: ‘the chances are that the positive [story] wins because the image of [the FBI] is deeply engraved in the mind of the people.' Because of social programming, the inhabitants of a given society automatically favor certain values. The ideological playing field's lack of levelness means that seemingly equal presentations of ideas are not really equal."

"In the light of this situation, Marcuse made a rather cunning inversion (one that has been aped countless times since by cultural organs across the United States): The fact that society is so radically unequal means that we should be intolerant and repressive in the name of tolerance and liberty. He rejected what he termed ‘indiscriminate tolerance' - a tolerance that accepts all viewpoints - in favor of ‘liberating tolerance' or ‘discriminating tolerance.' Unlike many of his disciples, Marcuse was frank about what this intolerance would mean: ‘Liberating tolerance, then, would mean intolerance against movements from the Right and toleration of movements from the Left.' When many in the media junked the Bush-era refrain, ‘Dissent is patriotic', and began to suggest that dissent during the Obama administration was a product of some unhealthy motivation (especially racism), they were putting into practice Marcuse's theory of ‘discriminating tolerance.'"

The political extremism in academia can only persist by inventing ever increasing degrees of extremism and can only survive in an environment devoid of alternatives.

The time has long passed for the diversion of federal funds away from politically intolerant colleges and universities to more practical and effective regionally-based business/online educational consortia that fulfill the needs of the marketplace, community and the students rather than perpetuating leftist propaganda mills dedicated only to their own institutional self-preservation.

"Too much of what is called ‘education' is little more than an expensive isolation from reality." -- Thomas Sowell

UPDATED: Online Straw Poll - What grade would you give President Trump's first 100 days?

There are a number inter-related reasons this has happened.

When the federal government will lend 100% of college costs to any applicant, it is no different than when we had NIJA mortgages, where an applicant with No Income, No Job and No Assets could borrow the asking price. So of course this created a seller's market, where people bid up the price of homes. Well, guess what happens in higher ed: students with unlimited funds can pay an unlimited amount for college classes.

In essence this has been a massive funding of the left, and a great growth in areas of study for which there is no commercial employment. How many businesses need people with degrees in Women's Studies. Zero.

Moreover, suppose Walmart or Sears were to offer 100% financing of some expensive item that was defective, and had colluded with government to get a special exemption so this borrowing could not be set aside by personal bankruptcy. Of course consumer advocates would be screaming for government to "crack down" on greedy lending. I think that the current student loan environment is pure exploitation of young people. How do you solve exploitation? You limit the damage that can be done.

The easiest way to both defund the left and to get a handle on federal spending is to limit federal student loans to no more than the median tuition for the major. That is a wise, it would be an incentive to higher ed to control costs and it would tend to focus student borrowing only for majors where there were real-world jobs. In other words, it would tend to limit student enrollment in wacky left wing areas of study. Of course such a proposal would be met with the loudest howls of protest in since the Vietnam War draft protests. But we have no business lending money to put students in debt serfdom in impractical areas of study.